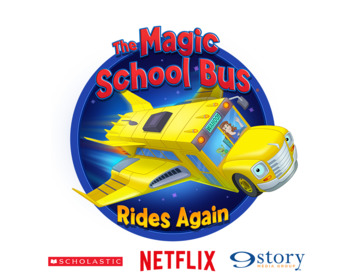 Each interactive video guide (answer keys included) in this set are sold individually in my store, and if you were to buy each separately the total would be $40, however if you take advantage of this amazing bundle you'll save $10! Don't miss out on this fun and educational set!

Join the Magic School Bus class on all their adventure filled field trips with this interactive video guide that helps focus on the key lessons and vocabulary in each episode! These worksheets are great for guiding children through the video and helping them to not only be involved in the learning process but to retain the information in a fun and educational way!

Includes interactive video guides for all episodes of Season 2! Below is a brief description of each episodes content for reference:

Episode 1 - The Land Before Tim

When the class gets an invite to compete on Tim’s favorite TV game show, the bus takes them all back in time to bone up on how fossils are formed.

From scratch marks to stolen pepperoni slices, the science classroom's a mess -- and all the clues seem to point to Wanda's bird friend, Marty the Magpie

Wanda's been so busy planning this year's Fall Fun Feast that she forgot about the food. Now her only hope is a farm that's supposedly haunted. Gulp!

Ms. Frizzle and the class race across the internet to recover a digitized Arnold before Jyoti's grandmother accidentally deletes him.

Episode 5 - I Spy with my Animal Eyes

The kids learn to see the world through the eyes of different animals when a careless Arnold loses Carlos's pet rat -- then turns her invisible!

While building (and rebuilding) their own space rover to tackle the terrain on a faraway planet, Jyoti and the class learn that it's OK to fail.

Episode 7 - The Good, the Bad, and the Gnocchi

A race between competitive brothers Carlos and Mikey takes the gang on the top of an in-pasta-ble mountain, where they learn about simple machines.

Episode 8 - Send in the Clouds

The kids go looking for rain to test out Jyoti's latest invention, "The Autobrella," only to wind up with their heads stuck in the clouds.

Episode 9 - Ralphie and the Flying Tennellis

A little math helps Raplhie make complicated midair calculations when his cousins recruit him to join their high-flying circus act.

Episode 10 - Tim and the Talking Trees

Ralph doesn't believe Tim when he tells him that trees can talk, so Ms. Frizzle takes the class to a forest that's louder than it looks.

Every person and animal poops. But the class isn't convinced that this so-called "brown gold" is as valuable as DA's famous inventor uncle says it is.

The bus takes Ms. Frizzle and the class deep inside Arnold's cousin Janet to learn why our genes makes us look, act and feel the way we do.

A field trip to the center of the sun takes a dangerous detour when the school's safety-conscious principal, Mr. Ruhle, tags along.