Making a Book about Washington D.C. During the Civil War 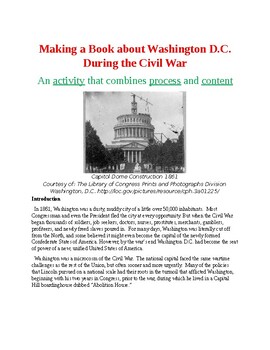 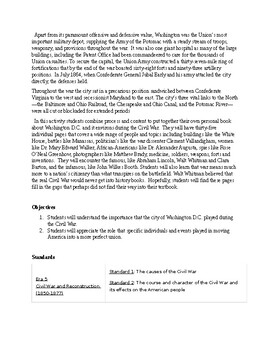 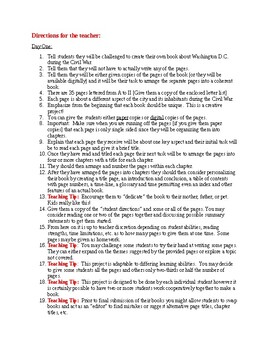 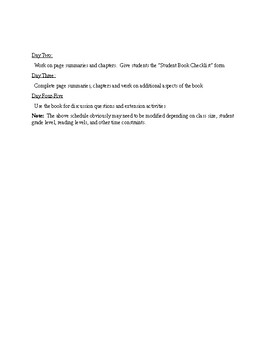 Making a Book about Washington D.C. During the Civil War

In 1861, Washington was a dusty, muddy city of a little over 50,000 inhabitants. Most Congressman and even the President fled the city at every opportunity. But when the Civil War began thousands of soldiers, job seekers, doctors, nurses, prostitutes, merchants, gamblers, profiteers, and newly freed slaves poured in. For many days, Washington was literally cut off from the North, and some believed it might even become the capital of the newly formed Confederate States of America. However, by the war’s end Washington D.C. had become the seat of power of a new, unified United States of America.

Washington was a microcosm of the Civil War. The national capital faced the same wartime challenges as the rest of the Union, but often sooner and more urgently. Many of the policies that Lincoln pursued on a national scale had their roots in the turmoil that afflicted Washington, beginning with his two years in Congress, prior to the war, during which he lived in a Capital Hill boardinghouse dubbed “Abolition House.”

Apart from its paramount offensive and defensive value, Washington was the Union’s most important military depot, supplying the Army of the Potomac with a steady stream of troops, weaponry, and provisions throughout the war. It was also one giant hospital as many of the large buildings, including the Patent Office had been commandeered to care for the thousands of Union casualties. To secure the capital, the Union Army constructed a thirty-seven-mile ring of fortifications that by the end of the war boasted sixty-eight forts and ninety-three artillery positions. In July 1864, when Confederate General Jubal Early and his army attacked the city directly, the defenses held.

Throughout the war the city sat in a precarious position sandwiched between Confederate Virginia to the west and secessionist Maryland to the east. The city’s three vital links to the North—the Baltimore and Ohio Railroad, the Chesapeake and Ohio Canal, and the Potomac River—were all cut or blockaded for extended periods

In this activity students combine process and content to put together their own personal book about Washington D.C. and it environs during the Civil War. They will have thirty-five individual pages that cover a wide range of people and topics including buildings like the White House, battles like Manassas, politician’s like the war dissenter Clement Vallandigham, women like Dr. Mary Edward Walker, African-Americans like Dr. Alexander Augusta, spies like Rose O’Neal Greenhow, photographers like Matthew Brady, medicine, soldiers, weapons, forts and inventions. They will encounter the famous, like Abraham Lincoln, Walt Whitman and Clara Barton, and the infamous, like John Wilkes Booth. Students will also learn that war means much more to a nation’s citizenry than what transpires on the battlefield. Walt Whitman believed that the real Civil War would never get into history books. Hopefully, students will find these pages fill in the gaps that perhaps did not find their way into their textbook.

1. Students will understand the importance that the city of Washington D.C. played during the Civil War.

2. Students will appreciate the role that specific individuals and events played in moving America into a more perfect union.

Thank you very much for purchasing this lesson. I would greatly appreciate any feedback and hopefully a favorable review.