Mankind The Story of All of Us - Episode 8: Treasure - Video Worksheet/Key 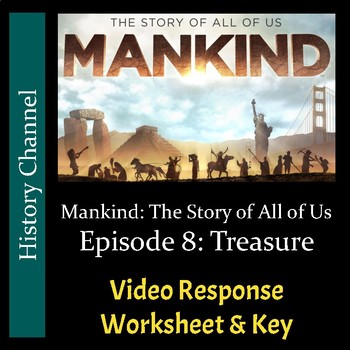 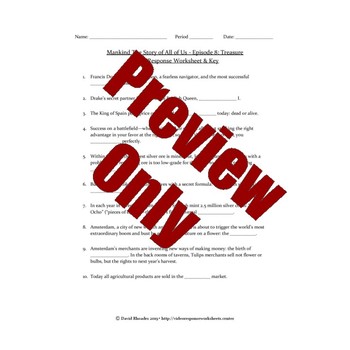 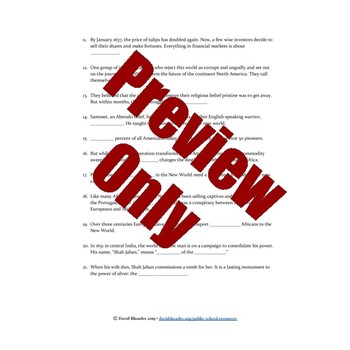 This Video Response Worksheet and Key is based on the History Channel documentary series "Mankind The Story of All of Us - Episode 8: Treasure."

Video Response Worksheets will turn your history lesson into a rich educational experience that keeps students attentive, engaged, and accountable. The questions are designed so that they occur at a regular pace to keep the students engaged but not overloaded. They are also designed so that a review of the completed worksheet gives students a basic overall summary of the video.

This episode is approximately 45 minutes long.

SERIES DESCRIPTION: Mankind The Story of All of Us is an epic 12-hour television event about the greatest adventure of all time—the history of the human race.

It takes 10 billion years for the ideal planet to form and 3 billion more for the right conditions to emerge before it finally happens: mankind begins. From there unfolds a fast-paced story told here through key turning points—stepping stones in our journey from hunter-gatherer to global citizen. It’s a tale of connections—why some ideas take hold and spread around the globe, and how the lives of people in one part of the world are shaped by events in another.

Episodes covered throughout the series include the ice age, the advent of farming, the sacking of Rome, the discovery of the New World, the fall of the Aztec empire, the Industrial Revolution and so much more. This is our story—a story of triumph and overcoming, of survival on a harsh and brutal planet. It is the story of all of—and how, against the odds, we survived.

Mankind is the first television series in a generation to tackle the history of the human race through the ages. Embracing groundbreaking storytelling methods, it features jaw-dropping imagery and dramatic reconstructions of the most critical events in human history.

ABOUT THIS EPISODE: Silver flows out of the mines of the Americas, helping spur new empires and global links. The growth of trade doesn’t just include products, it includes people. The brutal trans-Atlantic slave trade becomes an enormous human trafficking system, leading to enslavement of tens of millions of Africans. Pilgrims, searching for religious freedom, travel to the New World. Mankind is becoming increasingly connected, with transformative consequences.

Watch "Mankind The Story of All of Us" on Amazon

BUY THE MULTI-EPISODE BUNDLE AND SAVE 50%. Individual episode worksheets are $0.75. Purchased separately, all eleven cost $9.00. Buy the entire bundle for only $4.50.

Total Pages
2 pages
Answer Key
Included
Teaching Duration
45 minutes
Report this Resource to TpT
Reported resources will be reviewed by our team. Report this resource to let us know if this resource violates TpT’s content guidelines.