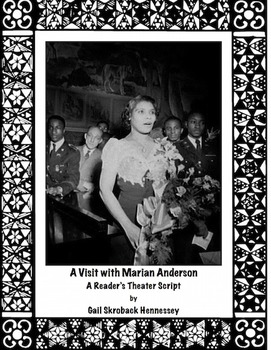 Use this informative Reader's Theater Script to learn about Marian Anderson, one of the most important singers of the 20th century. Anderson also played an important role in overcoming prejudice toward African American artists. In 1955, she was the first African American to sing at the New York Metropolitan Opera. She participated in the famous March on Washington, in 1963, and was also a “goodwill ambassadress for the United Nations, performing all over the world . Great for Black History Month in February or Women's History Month in March. Comprehension questions/extension activities, key.

1. Try this informative web quest on Martin Luther King! Grades 4 and up. One of Martin Luther King's quotes, “Injustice anywhere is a threat to justice everywhere.” I have added comprehension questions and additional links/extension activities. Skills include:reading for information and using research/computer skills. Martin Luther King, A Webquest

2. Learn about the Tuskegee Airmen with this informative play. Comprehension questions, a Did you Know? section, a Teacher Page with links, extension activities and a key are also included.Part of Ms. Bie Ografee's Talk Show Series. Tuskegee Airmen, A Reader's Theater Script

5. Can you name some famous African Americans who contributed to our country in arts,music, civil rights, sports, literature, politics,science and technology? There are 12 web questions, a Did You Know? section, comprehension questions, a teacher page with several extension activities, a key and lots of additional links of interest.Black History Month: A Webquest

6. Martin Luther King Jr. A Biographical Play: Learn about this important civil rights leader who worked for equality in non-violent ways. Martin Luther King envisioned a world where the color of your skin did not determine a person’s value and civil rights! He was also a excellent orator whose " I Have a Dream Speech" is probably his most famous. Using this Reader's Theater Script, part of my Ms. Bie Ografee Talk Show series of plays, your students will have fun acting out the parts and learning about the life of Martin Luther King, as they pretend to be in the audience of Ms. Bie Ografee's Talk Show. There are 10 audience informational questioners, a Did You Know? section of additional facts, comprehension questions, a teacher page with extension questions, vocabulary(which are highlighted in the play), additional links and the key. Martin Luther King: A Reader's Theater Script

Each play has the "guest" visiting Ms. Bie Ografee's Talk Show and audience questioners asking the guest questions about their life and accomplishments. The plays include a Did You Know? of factoids, comprehension questions, a teacher page with extension activities and the key:African American Trailblazers, A Bundle of Six Reader's Theater Scripts

Great for Black History(African American History)Month in February or any time of the year if you are covering American History or would like to use a biographical play as a Friday (or before a vacation) activity.