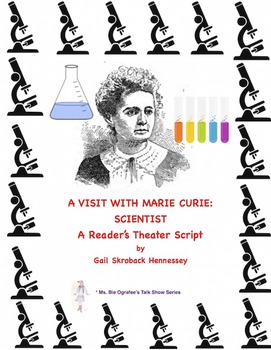 WOMEN in SCIENCE: Share biographies of women who have made contributions in science: Marie Curie, biography.

A "studio" audience asks questions of Ms. Bie Ografee's guest, Marie Curie. There are comprehension questions, a Did You Know? section, a Teacher Page with extension activities, key and additional links.

Other WOMEN in SCIENCE biographies:

1. Learn about Katherine Johnson, a physicist, space scientist and mathematician, who played a very important role with NASA’s early space missions. The movie Hidden Figures highlights the role of NASA's "computers" such as Katherine Johnson and their contributions. Part of my Ms. Bie Ografee Talk Show Series of Reader's Theater Scripts, there are comprehension questions, a Did You Know? section,a Teacher page with extensions/links and key. A great STEM biography!Katherine Johnson, Reader's Theater Script

2. A Biologist and marine zoologist, Carson’s books shared her love of nature, especially the ocean and its inhabitants. Her book, Silent Spring, sparked concern in how chemical pesticides were harming our environment. Carson helped to start the environmental movement in our country, which led to the creation of the U.S. Environmental Protection Agency. This Reader's Theater Script could be used as a STEM biography any time of year or especially during the time of Earth Day: Rachel Carson: A Reader's Theater Script

3. An English primatologist, Jane Goodall, has helped to change the attitudes people had toward animals, specifically the chimpanzee. Her method of studying chimpanzees involved living amongst them, for over 55 years. She is also known as an anthropologist, humanitarian and writer. She has worked for better treatment of animals in zoos and protection of the habitat of animals in the wild. https://www.teacherspayteachers.com/Product/Jane-Goodall-A-Readers-Theater-Script-4836410 Students will have fun learning about the life of Jane Goodall with my Reader's Theater Script. Part of my Ms. Bie Ografee Talk Show Series, a "studio audience" asks questions of Ms. Bie Ografee's guest, Jane Goodall. In addition to the host and guest, there are 10 audience questioners. There are several DiD You Know? facts, comprehension questions, a map activity as well as a Teacher Page with additional extension activities and the keys.