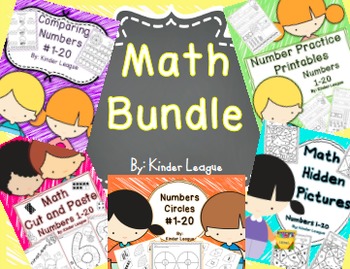 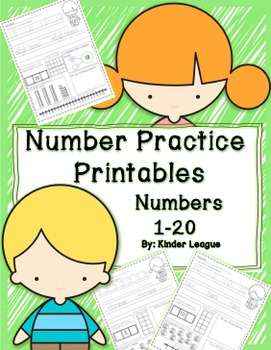 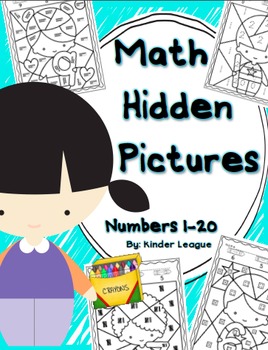 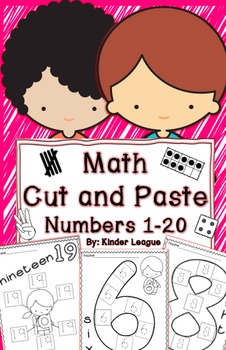 Math Cut and Pastes Numbers to 20 - In this packet you will get 25 Math/ Number Cut and Pastes. Students will trace the number and sort the pictures (ten frames, coins, base ten blocks, tallies, and dice) that show the right amount by cutting them and pasting them into the correct place. These are a favorite of our students!

Comparing Numbers math packet focusing on numbers to 20. In this packet you will get 22 various worksheets to help your students master the difficult standard of comparing quantities. We have included: fill in the ten frame worksheets, number order cuts and pastes, and a Memory game, just to name a few!

Number Practice Worksheet pack. In this pack you will get a worksheet for each number, focusing on numbers 1-20. On each worksheet students will practice tracing and writing the number and the number word. You will also see other math concepts; like before and after, number identification, filling in amounts, counting coins and more.

By purchasing this bundle you will save $6.00! Pick up a favorite of students and teachers! Featuring Pen Pals Clip art!
Log in to see state-specific standards (only available in the US).
CCSSK.OA.A.5
Fluently add and subtract within 5.
CCSSK.OA.A.4
For any number from 1 to 9, find the number that makes 10 when added to the given number, e.g., by using objects or drawings, and record the answer with a drawing or equation.
CCSSK.OA.A.3
Decompose numbers less than or equal to 10 into pairs in more than one way, e.g., by using objects or drawings, and record each decomposition by a drawing or equation (e.g., 5 = 2 + 3 and 5 = 4 + 1).
CCSSK.OA.A.2
Solve addition and subtraction word problems, and add and subtract within 10, e.g., by using objects or drawings to represent the problem.
CCSSK.CC.B.4c
Understand that each successive number name refers to a quantity that is one larger.
Total Pages
137 pages
Answer Key
N/A
Teaching Duration
Lifelong tool
Report this Resource to TpT
Reported resources will be reviewed by our team. Report this resource to let us know if this resource violates TpT’s content guidelines.