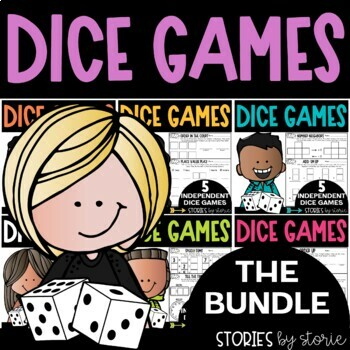 These dice games can be used during math workshop, math rotations, or center time. Once the games are introduced, students can play them independently so you can work with your small group.

Teacher Tip: I print my game boards onto cardstock paper and place inside of sheet protectors. Students use dry erase markers so the boards can be used over and over all year long. Some games also include sample boards.

• Order Up - students create 2-digit numbers and put them in numerical order (Two versions included: largest to smallest and smallest to largest).

• Double the Fun - students roll one die, double the number, and cover it on their game board (2 versions included).

• Race to the Top - students will roll a die and record the results on a graph (2 versions included). There is also an option for Race to the End. This is a similar game, but the graph is horizontal.

• More or Less - students will roll the dice to create a 2-digit or 3-digit number. Then students will identify the number that is one more and one less.

• Number Neighbors - there are two versions of this game (2-digit and 3-digit). Students roll the dice and place the number created in the center box. Then students identify the numbers that are 1 more, 1 less, 10 more, and 10 less.

• Add 'Em Up - Students roll two dice and add the numbers together. (Two versions included: 1-digit and 2-digit). I have also included one page with horizontal problems.

• Take 'Em Away - Students roll two dice (placing the larger number on top) and find the difference between the two numbers. (Two versions included: 1-digit and 2-digit). I have also included one page with horizontal problems.

• Cover 'Em All - Students roll two dice and add the numbers together. Students then place a marker on the board covering that number (if available). The game continues until all numbers have been covered. There is also a version using only one die.

• Roll to 100 - Students roll one dice and move a game marker around a 100-grid. The game is over when the game marker lands on (or passes) 100. There is a second version included that students can color as they move across the 100-grid. I have also included versions for Roll to 50 and Roll to 20.

• Order In the Court - students will roll 3 or 4 dice. Then students will rearrange the numbers to create the largest and smallest number possible (two versions of this game).

• Roll and Compare - students will roll the dice to create 2-digit and 3-digit numbers. Students will then use >, <, or = symbols to compare the two numbers (two versions of this game).

• Odds vs. Evens - students will roll the dice and find the sum of the two numbers. Students will then graph whether the sum is odd or even.

• Speedy Sums - students will roll one die and add it to a number already on the page to find the sum. (Two versions included)

• Dicey Differences - students will roll one die and subtract it from a number already on the page to find the difference. (Two versions included)

• Knock Out - Students will roll two dice. They can add or subtract the numbers. Students will choose one number to cover on the board and roll again. The goal is to cover as many numbers as possible without repeating a number. Students will play three rounds and determine which round had the most numbers covered.

• Roll a Pattern - Students will roll one die three times, record the numbers, and then continue the pattern. I have also included an option to roll one die four times.

• Tell the Time - Students will roll one die three times and record these numbers on the digital clock. Then, students will draw hands to show the time on an analog clock. If students roll a time that does not exist (ex. 5:64, they will draw an X on that clock).

Note - the multiplication and division games are NOT included in this bundle.

Stay Connected with Stories by Storie

To find out about freebies, discounts, and new products, look for the ★ green star next to my store logo and click follow me.

If you have any questions, comments, or need changes made to this product to fit your classroom needs, please e-mail me: atozscrapbook@gmail.com. You can also contact me through my store's Q & A section.

© Stories by Storie - This item is intended for a SINGLE classroom. Duplication for other classrooms, an entire school, a school district, or for commercial purposes is strictly forbidden. Violations are subject to penalties of the Digital Millennium Copyright Act.