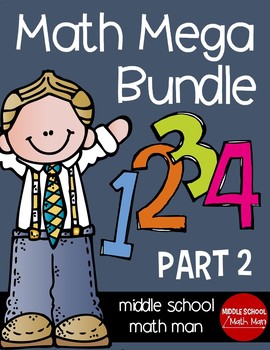 This bundle includes 48 of my individual resources, including math task cards, exit slips, games, and math sorts for upper elementary and middle school math. Activities can be use during math workshop centers or in a whole group setting. Products are designed for 6th grade math, but can be used from 5th-7th grade math. The bundle includes resources that were created after my Math Mega Bundle (For Upper Elementary/Middle School Math) PART 1. There is no overlap in products between these two bundles. Individually, the products included in this bundle amount to close to $170. This product DOES NOT include any future products in my store.

For additional information about what is included, be sure to check out this blog post!

5. Fractions and Decimals Board Game Bundle

--- Decimal Derby! An Adding and Subtracting Decimals Board Game

--- Fraction Fury! An Adding and Subtracting Fractions Board Game

7. Area and Volume Board Game Bundle

8. Probability Panic! A Math Board Game

9. Mean, Median, and Mode Mania! A Math Board Game

Many of these products focus on increasing students understanding of number systems, rates and ratios, expressions and equations, geometry, statistics, and probability.

Total Pages
949 pages
Answer Key
Included
Teaching Duration
1 Year
Report this Resource to TpT
Reported resources will be reviewed by our team. Report this resource to let us know if this resource violates TpT’s content guidelines.