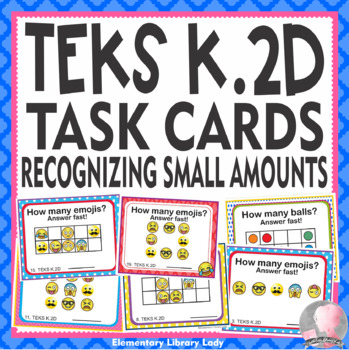 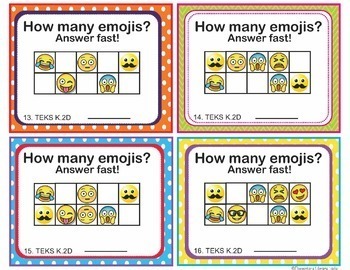 This is a set of 25 task cards with 25 different Kindergarten math problems, aligned to Texas TEKS K.2D. Note that Common Core is NOT mentioned or referenced in this resource. An answer key, as well as a blank answer sheet, are also provided, as well as two posters for the Texas standard.

Why buy this resource?

This resource has 25 different task cards aligned to TEKS K.2D math. These task cards require the student to instantly recognize the quantity of a small group of objects in ordered and random arrangements. Up to ten items (emojis or balls) are noted on each task cards, both within and without ten-frames. These task cards can be used for math stations, Scoot, teaching, reinforcing, or additional practice on the standard. These task cards are created specifically for this Texas standard.

What's in this resource?

We also have other TEKS K.2 task cards:

TEKS K.2A Task Cards Counting Up and Down to 20

Don't forget that leaving feedback earns you points toward FREE TpT resources. We love that feedback!

Also, follow us to always know when our latest resources are uploaded. And please contact us with any questions. And finally, don't forget - we're always creating!