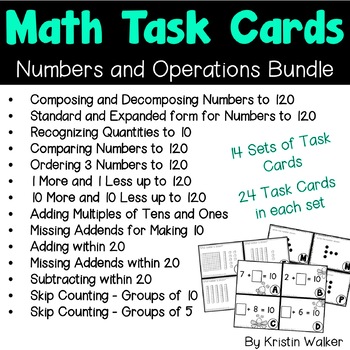 Bundle Description
This is a group of 14 different sets of task cards to practice a variety of math skills for numbers and operations. Each of the 14 sets contains 24 task cards. It also comes with a recording sheet, answer key, and quick check/exit ticket for each one.

The task cards included in this set are:

You can use them as a quick check or exit ticket before or after a lesson by just showing one card on a document camera or large screen for students to answer or by passing them out so each student has a different one. A seperate recording sheet for this is also included. Just cut into fourths and have them write the letter that was on the card in the circle.

Please check my store for even more engaging math games and activities!