Mathew Brady: A Reader's Theater Script on the "Father of Photojournalism" 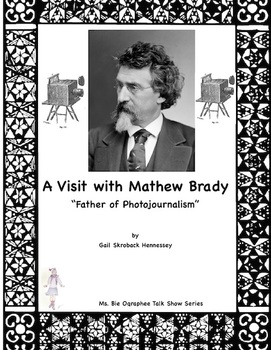 Part of my Ms. Bie Ografee series, Ms. Bie Ografee welcomes Mathew Brady to her talk show. Students will have fun acting out the parts of this informative play on the "Father of Photojournalism" and learning about his photography especially recording the events of the Civil War.

Whether you are studying the Civil War or just looking for a Reader's Theater Script on a famous person to use on a Friday, for a substitute or before a holiday, this play would be a great addition to your classroom!

The resource also includes a Did You Know? section of fun facts on the topic, comprehension questions, a Timeline activity on the Civil War and a Teachers Section with extension activities, additional links and the key.

On April 12th, 1861 the Civil War began.The long and bloody war that ended in 1865, took the lives of over 600,000 soldiers leaving more than 1,100,000 soldiers injured. Learn about the Civil War with this webquest. Each of the 11 questions have lots of information.I've also included a number of extension activities and resource links. The webquest comes with the key: Civil War: A Webquest

It is estimated that approximately 400-700 WOMEN fought as soldiers during all the major battles of the Civil War.(1861-1865) Since females were not allowed to fight in battles at that time, those women that did become soldiers disguised themselves as men! This Ms. Bie Ografee Talk Show Reader's Theater Script features Sarah Rosetta Wakeman, Sarah Emma Edmonds, Amy Clarke and Mary Galloway. Three of these women fought on the Union side during the Civil War and one fought for the Confederacy. Students will learn about these women soldiers and their contribution to the Civil War. The format is a talk show host with a studio audience who get to ask questions of the "guests". There is also a Did You Know? section of facts on the Civil War, Comprehension Questions and a teacher page with extension activities, additional links of interest and the key to the comprehension questions.Civil War: Women Soldiers. A Reader's Theater Script