Mayflower. What became of the Mayflower? A Reading Passage 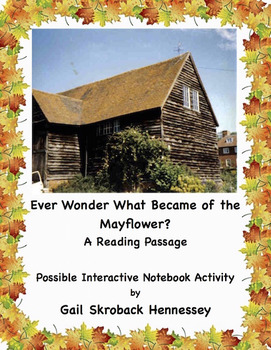 I found my visit to the "Mayflower Barn" on a trip to England(about 40 minutes by train from London) so very interesting. William Penn is buried in the church yard.

Please consider following me. Click on the green star by my picture. Thanks!

Ever wonder what became of the Mayflower? The ship sailed with 102 Pilgrims over the Atlantic to North America, in 1620. If you are expecting to find it docked to some pier, or in a museum, you’d be wrong. That’s because the Mayflower most likely ended up as scrap wood and may have ended up in an old Quaker Barn in Great Britain! This Reading Passage is a possible Interactive Notebook Activity with Did You Know? facts and several Your Turn questions.

Other possible resources of interest:

2. Learn about the Mayflower and the Pilgrims with this informative web quest!There are ten informative text web quests,extension activities,fun facts. Skills include:reading for information and using research/computer skills. Mayflower and Pilgrims: A Webquest

3. A Ms.Bie Ograffee Reader's Theater Script, an interview with Love Brewster, a Pilgrim of Plymouth Colony.Love was an actual member of the 102 Pilgrims that came to America. He was about nine years old. Interestingly, several in his family also had unusual names. He had a sister named Patience, another named Fear and a brother named...Wrestling! Learn lots of interesting information about the Pilgrims and the Thanksgiving feast, of 1623, with this fun format.

Using the format where Love Brewster is a guest on Ms. Bi Ograffee's Talk Show, the studio audience asks Love questions about the voyage on the Mayflower, the first winter and the first Thanksgiving at Plymouth. The play includes comprehension questions, a Did You Know? Section, a Teacher Page with extension activities, links and the key:Reader's Theater Script on Love Brewster, A Pilgrim at Plymouth Colony

Great for around Thanksgiving time or for a unit of study on the Pilgrims.