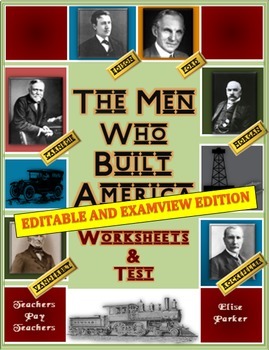 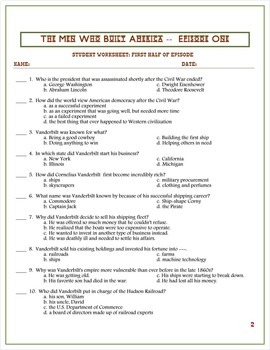 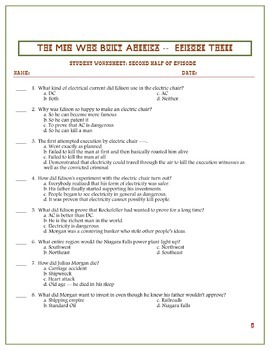 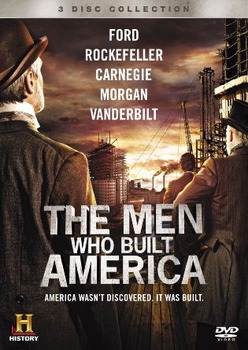 This is an editable and Examview edition of my popular "Men Who Built America" worksheet series.

It consists of a zip download file that includes:

----One Microsoft Word file of worksheets for all episodes plus a final test.

----Nine Examview test bank (.bnk) files: two for each episode of the series, so that teachers can choose from a "first half" or a "second half" file for the episode being viewed. The ninth file is the final test that covers the entire series.

For full details, read on:

This download consists of easy-to-correct worksheets designed to go with every episode of "The Men Who Built America," a highly engaging History Channel series covering the industrialization of the United States.

MEN WHO BUILT AMERICA WORKSHEETS ARE DESIGNED FOR CLASSROOM CONVENIENCE

This worksheet set contains 4 multiple-choice worksheets, each covering one 80-85 minute episode of the series. However, because a class period is frequently less than an hour, each of these worksheets is also divided into a first half and last half. This will let teachers easily show a segment and review answers all within a single class period.

EASILY WORKS WITH BOTH WAYS THE SERIES IS SHOWN

The Netflix version of The Men Who Built America uses these 80-85 minute-long episodes. However, sometimes when the series airs on the History Channel, it is presented as eight 40-45 minute shorter episodes instead of four "double episodes." Because I have split the double episodes in half when making the worksheets, however, this worksheet set will still work perfectly, even if your classroom showing uses the eight episode structure.

WHAT YOU THESE MEN WHO BUILT AMERICA WORKSHEETS INCLUDE

plus: A final exam about the entire series: 80 questions drawn from the previous episode-based sets

Hundreds of questions in all!

WHERE TO FIND THE MEN WHO BUILT AMERICA

The series plays regularly on the History Channel and is also playing on Netflix. It can also be found on other streaming sites -- a simple Google search may be the best way to find places where it is currently available.

ABOUT THE STRUCTURE OF THE SERIES

The Men Who Built America starts with the assassination of Abraham Lincoln and goes forward in mostly chronological order until the breakup of Standard Oil in the early decades of the 20th century.

HISTORY TOPICS COVERED IN THESE MEN WHO BUILT AMERICA WORKSHEETS

---Devastation of the Civil War

---Working conditions during the Gilded Age

---Early unionization and strikes, including the Homestead Steel Strike

---Rise of Theodore Roosevelt to the presidency

---Anti-trust legislation and Roosevelt's early moves against trusts and monopolies

---The rise of mass production including the assembly line

---The breakup of Standard Oil

---The new age of business regulation

---The creation of a prosperous middle class and the industrial readiness of the U.S. to assist the Allies when entering WWi

WINNER OF TWO EMMY AWARDS, The Men Who Built America is a really fantastic way to get students interested in the way the Industrial Revolution unfolded in the United States -- and how it affected both the "titans," and the common man!

LOOKING FOR A LESS EXPENSIVE OPTION FOR MEN WHO BUILT AMERICA WORKSHEETS?

If you want to edit the worksheets or use the Examview files for electronic delivery, the current product is the best one for you. But if all you need to do is print out Men Who Built America worksheets, you might prefer the PDF version of the product, which is a little less expensive:

The Men Who Built America: PDF Worksheets for All Episodes plus Final Test

LOOKING FOR WORKSHEETS ONLY FOR SPECIFIC PARTS OF THE SERIES?

The Men Who Built America Worksheets for Episode 2 -- Bloody Battles

The Men Who Built America Worksheets for Episode 4 -- When One Ends, Another Begins

Clicking on any of the links above will also let you see in more detail what each of the 4 episodes covers.

SAVE MONEY BY BUNDLING

Purchased separately, the four episode worksheets plus the final test would cost almost $14.00 but this Examview/Editable bundle is offered at the bargain price of 9.99 and the PDF Worksheet Bundle is even less than!