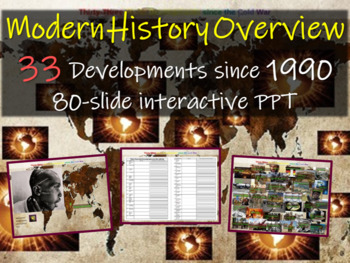 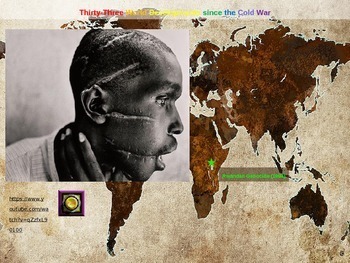 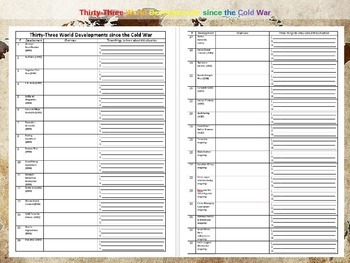 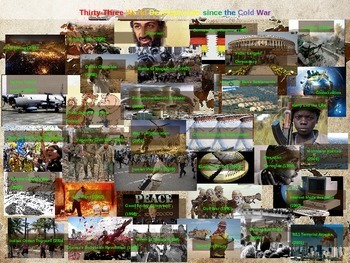 2) 33 links to relevant videos embedded in the PPT slides

3) 2-page graphic organizer for students to follow along (formatted perfectly to fit one one paper, front and back, for easy printing, in both MS WORD and PDF format)

4) 2-page research graphic organizer for students to use in further research on the topic of their choice (formatted perfectly to fit one one paper, front and back, for easy printing, in both MS WORD and PDF format)

This engaging series of PowerPoint slides gives a brief summary of 33 historical developments since the close of the Cold War. Each topic is also accompanied with a link to a relevant video clip to show students. Students follow along with their graphic organizer (attached), then each student will pick a different topic to research further and put their information on a different graphic organizer (included). Various samples are included to show as models for the students. Topics include:

Kony and the LRA in Uganda (ongoing)

Total Pages
80 slides and four pages
Answer Key
N/A
Teaching Duration
1 Week
Report this Resource to TpT
Reported resources will be reviewed by our team. Report this resource to let us know if this resource violates TpT’s content guidelines.