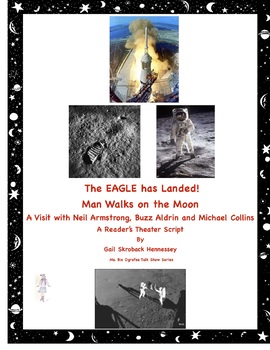 After 76 days, Neil Armstrong, Buzz Aldrin and Michael Collins, the astronauts for the historic Apollo 11 mission to the moon, made history on July 20, 1969. After the Columbia reached the moon’s orbit, Armstrong and Aldrin went into a smaller module, the Eagle. They began a descent onto the surface of the moon and successfully landed on the moon where both men would become the first humans to actually walk on the moon. The date was July 21, 1969!

Just think, from the first powered flight in 1903, it was just 66 years before we had humans walk on the moon!

Part of my Ms. Bie Ografee Talk Show Series, Armstrong, Aldrin and Collins are guests of Ms. Bie Ografee and her studio audience ask the guests questions about their historic trip to the moon. In addition to the play, with 10 audience questioners, there are Did You Know Fun Facts, comprehension questions, a teacher page with extension activities and the key to the comprehension questions.

Check out these additional resources:

1. Learn about the history of space with this informative web quest.

There are 12 web questions, comprehension questions and extension activities: https://www.teacherspayteachers.com/Product/Space-The-Final-FrontierWebquestExtension-Activities-1526888

2. Learn about Astronaut John Glenn's historic flight to become the first American to Orbit the Earth. Years later, he would also become the oldest American to go on the Space Shuttle! This biographical web quest also contains several questions about the early days of space exploration. There are several extension activities and the key. https://www.teacherspayteachers.com/Product/John-Glenn-Astronaut-A-Webquest-2914006

3. Learn about Katherine Johnson, a physicist, space scientist and mathematician, who played a very important role with NASA’s early space missions. The movie Hidden Figures highlights the role of NASA's "computers" such as Katherine Johnson and their contributions. Part of my Ms. Bie Ografee Talk Show Series of Reader's Theater Scripts, there are comprehension questions, a Did You Know? section,a Teacher page with extensions/links and key. A great STEM biography! https://www.teacherspayteachers.com/Product/Katherine-Johnson-ScientistThe-Computer-that-Wore-SkirtsPlay-2961216