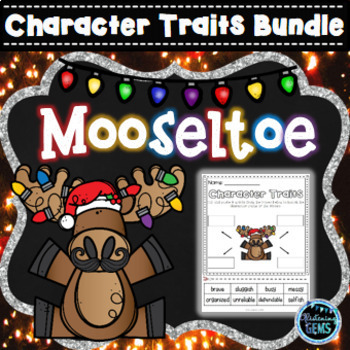 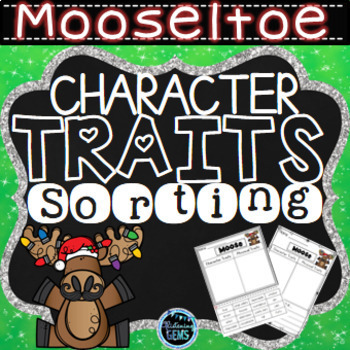 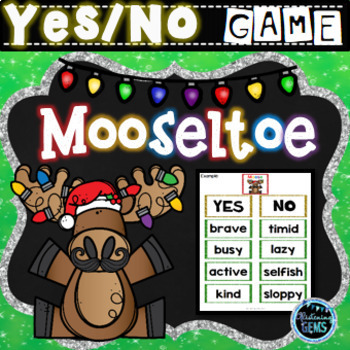 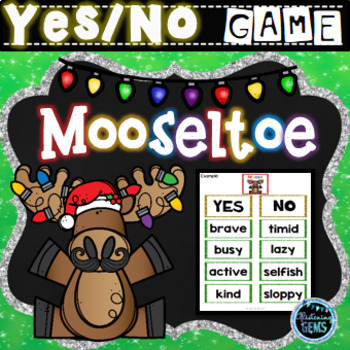 Mooseltoe Activities Bundle includes 4 fun filled character traits products combined into one pack! This kit will save you over 25% off! A variety of activities are included in this Christmas Book Companions Bundle, to help students consolidate their understanding of character traits, physical traits and feelings for the popular story, 'Mooseltoe' by Margie Palatini. Mooseltoe printables include: sorting worksheets, cut and paste activities, anchor charts, graphic organizers, interactive notebook activities, wanted posters, who am I worksheets, roll a die game, character traits game and comprehension task cards.

The pack entails the following activities for the popular story, 'Mooseltoe':

♥ Write character traits- students write their own qualities, physical traits and feelings for the Moose.

♥Lift the Flap Activity (interactive notebook): students will write character traits, physical traits and feelings to describe the Moose throughout the story.

♥Who am I Activities - students will write 3 character trait clues to describe the Moose.

♥Wanted Poster - students will create a wanted poster of the Moose, and they will describe his physical traits.

Please see the preview before purchasing to get a further insight into what this package entails.

Mooseltoe Character Traits Yes/No Game is the perfect book companion to undertake in December leading up to Christmas! In this character traits game, students will be making inferences about characters, in order to sort the character trait cards under the yes or no headings. 'Mooseltoe' by Margie Palatini character trait game will expand students' vocabulary, and consolidate their understanding of character traits.

Mooseltoe Yes/No Character Traits Game' can be played with 1-2 players, small group or played as a whole class. To play as a group:

•Students sit around a circular table or on the carpet. Place the Moose character card in the middle of the circle, and put the headings yes and no underneath (see example).

•Ask each student to provide evidence or a reason why they think the character displays that character trait or not. For example the Moose was organized because he made a long list of things he had to do!

•Teacher calls out a character trait and a character card, and then asks the class: Is the Moose responsible?

•Students then walk to the yes or no corner.

•If the students went to the wrong corner, then they are out of the game.

Mooseltoe activities includes two sets of the following printables in color and black and white:

• Cut and paste sorting worksheet – sort the character traits and physical traits for the Moose.

• Worksheet – students list their own character traits and physical traits for the Moose. Complete the sentence – I infer the Moose is…..

• Worksheet – students list their own character traits for the Moose under the yes and no heading. Complete the sentence – The Moose’s best quality is…

• Cut and paste sorting worksheet – sort the character traits to match the events in the story.

• Worksheet - students list their own character traits to match the events in the story. Answer the question – Can you make a text-to-self connection from one of the events above?

• Cut and paste sorting worksheet – sort the synonyms and antonyms for the character trait: brave.

• Cut and paste sorting worksheet – sort the synonyms and antonyms for the character trait: responsible.

Mooseltoe Christmas Book Companion - These task cards are designed for first grade to third grade to provide your students with practice with identifying character traits, feelings and physical traits of characters in the story. The variety of questions on the task cards will allow your students to make inferences about characters. Mooseltoe is by Margie Palatini, and it is the perfect Christmas book companion to incorporate into your guided reading lessons or literacy centers during the month of December!

**This resource caters for American, Australian and British Spelling.**

How to Catch an Elf - Character Traits Bundle