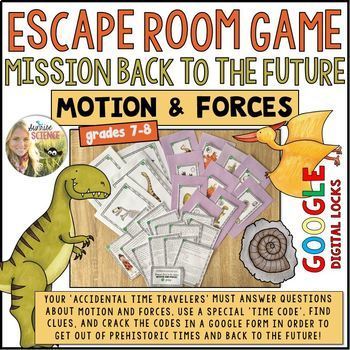 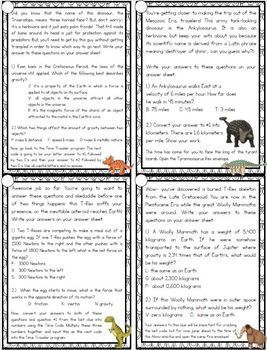 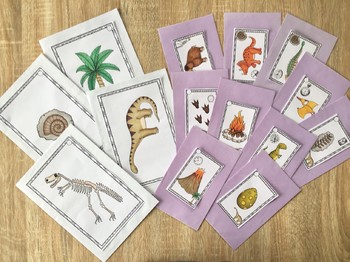 This Motion and Forces Escape Room Game activity involves teamwork and attention to detail as your students imagine that they have found themselves transported by a time machine back to the beginning of the Mesozoic Era! The Time Machine has a ‘Reverse Trip’ button, but it requires that its passengers follow a series of clues and answer questions to ultimately find a secret message that will grant them access back to the future! The questions on the clues involve defining, identifying the units for, and calculating speed, velocity, and acceleration, understanding average versus instantaneous speed, analyzing basic position vs. time and speed vs. time graphs, the basic concepts of Newton’s 3 Laws of Motion, understanding net force, the forces of friction and gravity, and how weight of an object depends on gravity.

The students will answer questions and follow directions/riddles to locate envelopes in the classroom with more clues. They will also be instructed along the way to input codes (in the form of letters and numbers) into the “Time Traveler” program, which is a Google Form that they will access online. As they input the consecutive codes into the Google Form, they will be brought closer and closer to the final clue, which will unlock only with the special code.

Teacher must provide envelopes (4 - 6" x 9" and 10 - 4.75" x 6.75" per student group of 4 - 6 students). You will also need one real or fake plant, a clock (analog or digital), a table, and a small ‘nest of dino eggs’ (put a few plastic Easter eggs in a bowl or basket, or if you don’t have access to this, I have included a small picture of a dino egg nest—just tape it on the wall somewhere in your classroom and you will hide envelopes somewhere nearby)! All other materials are included, including detailed teacher directions for set-up and facilitation and an answer key to the student answer sheet.

The motion and forces questions include concepts covered in the Next Generation Science Standards NGSS MS-PS2-1, MS-PS2-2, and MS-PS2-4.

Please note that you should not buy this with plans to use it tomorrow! You will need to allot around 45 minutes to set up this game for 5 groups. Once you get the hang of the way the game is set up for one group, the prep work goes quicker!

If you are teaching a unit on Motion and Forces, you may also be interested in these resources:

Total Pages
16 pages
Answer Key
Included
Teaching Duration
45 minutes
Report this Resource to TpT
Reported resources will be reviewed by our team. Report this resource to let us know if this resource violates TpT’s content guidelines.