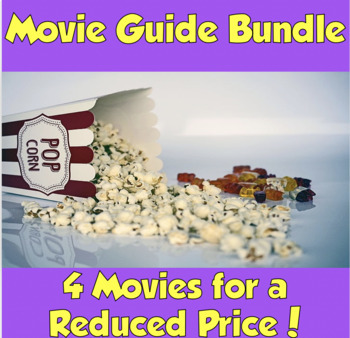 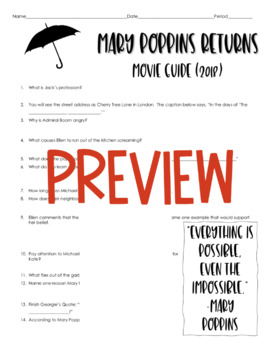 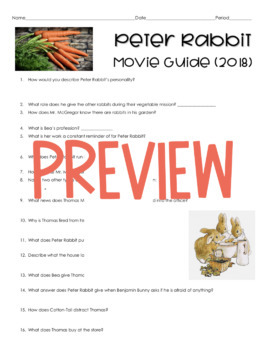 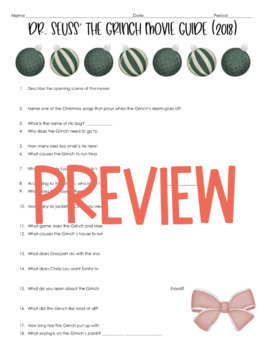 This movie guide bundle contains four popular films from 2018 at a reduced price. All of these films are available for individual sale in my store, but you save by purchasing the bundle! These films would be perfect for End of Year films, last minute lesson plan, sub plans, film before a break, or an after testing treat. Below are the links to the individual page for each film and information on each movie guide.

Mary Poppins Returns follows the lives of the grown-up Banks children and the troubles they are facing during the Great Slump in England. Mary Poppins befriends Michael Banks' children and your typically Mary Poppins hi-jinx ensue. The film is full of new songs that will have you singing along and/or ready to dance! The film stars Emily Blunt, Lin-Manuel Miranda, Meryl Streep, Colin Firth, Ben Whishaw, Emily Mortimer, Julie Walters, Angela Lansbury, and Dick Van Dyke.

My movie guide contains 50 questions and an answer key has been provided for you. The film's runtime is 130 minutes and it is rated PG for some mild thematic elements and brief action.

This movie guide could be used as last minute sub plans, an end of the year activity, after a lesson on the works of A. A. Milne, or for a reward day. There are 40 questions in my movie guide and an answer key has been provided for your convenience. The movie is rated PG for some action and runs 104 minutes in length.

Dr. Seuss' How the Grinch Stole Christmas takes on a whole new form in Illumination's 2018 production of The Grinch. The story follows the tale of the sad green guy who lives atop Mount Crumpit. This version takes on its own spin as we learn of the Grinch being an orphan and getting glimpses of loneliness throughout his life. After a little help from his his longtime friend Max and a few new friends (Cindy Lou/Fred), the Grinch learns that love and kindness are two things we need the most. This film would be great to use before Christmas break. The film stars Benedict Cumberbatch, Pharrell Williams, Rashida Jones, Kenan Thompson, Angela Lansbury, and Cameron Seely.

My movie guide contains 40 questions and an answer key has been provided for your convenience. The movie is rated PG for for brief rude humor and the runtime is 86 minutes.

Peter Rabbit is the 2018 adaptation of Beatrix Potter's famous work. The lovable and mischievous Peter Rabbit is up to his usual hi-jinx when it comes to his neighbor's garden. The film stars Rose Byrne as Bea (Beatrix Potter) and James Corden as Peter Rabbit. The film also stars Domhnall Gleeson, Sia, Sam Neill, Margot Robbie, Daisy Ridley, Colin Moody, and Marianne Jean-Baptiste. This film would be a fun addition before Easter or after studying Potter's work.

My movie guide contains 35 questions and an answer key has been provided for your convenience. The film's runtime is 95 minutes and it is rated PG for some rude humor and action.

By purchasing this item, you agree to use it for your individual classroom use only and will not share with others, post online, or claim as your own. Additional licenses are available for a reduced price.