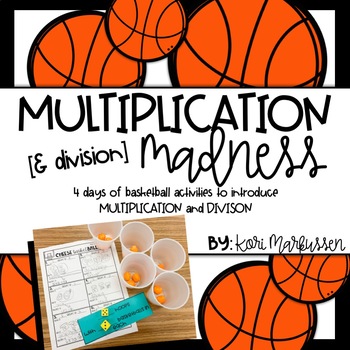 Each day you will receive two activities, a whole group and an independent. The whole group consists of 6-7 slides each day. These can be projected on a board or used on iPads. After introducing the concept students will move into a hands on independent each day with a recording sheet.

Day 1: Repeated addition with player salaries. Students will be looking at player trading cards and will model the salary earned each year to find their net worth. (salaries are in $1 increments.)

Day 3: Separating into equal groups. Students will be taking players and separating them into teams.

Day 4 Describing division. Students will be looking at a concession stand and will be describing what they see. The items are arranged in an array. and they will decide how many rows or columns, and then how many are in that group. For the independent they will be doing the same thing but will be using play dough basketballs to model the arrays.