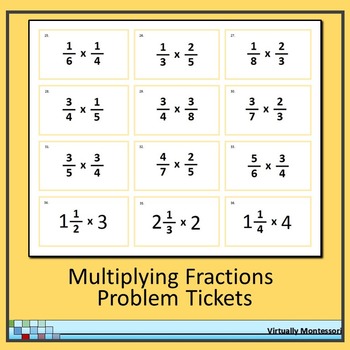 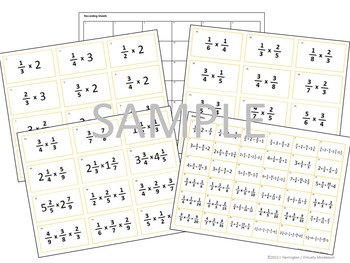 These multiplication of fraction problems are intended to be follow-up practice after a lesson. Each group of problems adds a new layer of complexity (see bulleted list below for how each problem set is differentiated). The yellow border represents the multiplication operation in Montessori math lessons and materials.

Instructions
Print, cut and laminate. Alternatively, the whole sheets can be laminated without being cut to be used as a set of problems, rather than as individual tickets. The answer key is designed to be left as one whole sheet.

After giving a lesson, chosen tickets are handed by the teacher to the student as his follow-up practice. The student completes the work on his own, records on the recording sheet or in a math journal, then checks his work using the answer key. Each problem ticket has a number on it that corresponds with the answer key.

Another way to use the tickets is to cut them up and have them in a basket for use as a math activity or center. The students can choose which tickets they complete based on the choices provided in the basket. After recording, the student can check his work with the answer key.

Be the first to know about my new discounts, freebies and products! Here's how:
• Look for the green star near the top of any page within my store and click it to become a follower. You will then receive customized email updates about my store.