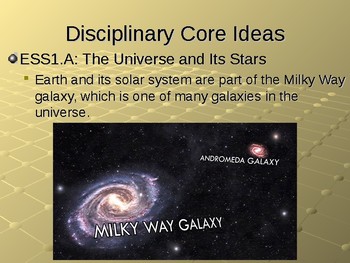 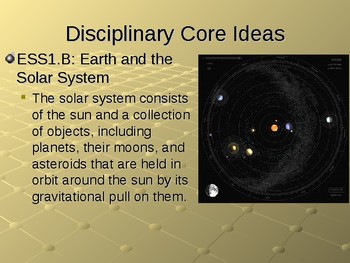 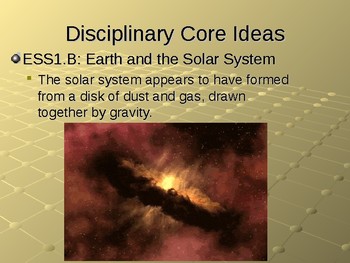 Meant as a resource for background knowledge, not a student performance tool or model. Check out my NGSS MS ESS1-2 to check for understanding.

Can be edited for younger or older learners. Includes GIF animations to keep student attention.

MAIN IDEA-Gravity is the force that holds together the solar system and Milky Way galaxy and controls orbital motions within them.

ESS1.A: The Universe and Its Stars

Earth and its solar system are part of the Milky Way galaxy, which is one of many galaxies in the universe.

ESS1.B: Earth and the Solar System

The solar system consists of the sun and a collection of objects, including planets, their moons, and asteroids that are held in orbit around the sun by its gravitational pull on them.

The solar system appears to have formed from a disk of dust and gas, drawn together by gravity.

Gravity-the universal force of attraction acting between all matter in the universe.

Solar System-the collection of eight planets and their moons in orbit around the sun, together with smaller bodies in the form of asteroids, meteoroids, and comets.

Galaxy-a huge collection of gas, dust, and billions of stars and their solar systems. A galaxy is held together by gravity.

There are various types such as barred, spiral, and irregular.

Legend has it that Isaac Newton generalized his ideas about gravity after an apple fell from a tree.

He came up with what is now a law about force, mass, and distance.

The Law of Universal Gravitation-all objects with mass are attracted to each other.

1) Gravitational force is larger between objects with larger masses.

2) Gravitational force is small between objects with less mass.

3) If the distance between two objects is increased, the gravitational force is reduced.

Orbit-path of a body revolving around an attracting center of mass, as a planet around the Sun or a satellite around a planet.

•Orbit motion affects many celestial bodies in our universe.

•Moons orbit around planets, all objects within the solar system orbit the sun).

•The orbital motion, in the form of a disk, of vast numbers of stars around the center of the Milky Way.

•Our solar system is one of many systems orbiting the center of the larger system of the Milky Way galaxy.

i. Gravitational forces from planets cause smaller objects (e.g., moons) to orbit around planets.

ii. The gravitational force of the sun causes the planets and other bodies to orbit around it, holding the solar system together.

iv. The hierarchy pattern of orbiting systems in the solar system was established early in its history as the disk of dust and gas was driven by gravitational forces to form moon-planet and planet-sun orbiting systems.

Objects too far away from the sun do not orbit it because the sun’s gravitational force on those objects is too weak to pull them into orbit.

The effect of gravity extends from each object out into space in all directions, and for an infinite distance. However, the strength of the gravitational force reduces quickly with distance.

Humans are never aware of the Sun's gravity pulling them, because the pull is so small at the distance between the Earth and Sun.

Objects would not be attracted to larger or closer objects.

Smaller planets would move in straight paths through space, rather than orbiting a more massive body)

Gravity is the force that holds together the solar system and Milky Way galaxy and controls orbital motions within them.

Log in to see state-specific standards (only available in the US).
NGSSMS-ESS1-2
Develop and use a model to describe the role of gravity in the motions within galaxies and the solar system. Emphasis for the model is on gravity as the force that holds together the solar system and Milky Way galaxy and controls orbital motions within them. Examples of models can be physical (such as the analogy of distance along a football field or computer visualizations of elliptical orbits) or conceptual (such as mathematical proportions relative to the size of familiar objects such as students’ school or state). Assessment does not include Kepler’s Laws of orbital motion or the apparent retrograde motion of the planets as viewed from Earth.
Total Pages
20 pages
Answer Key
N/A
Teaching Duration
N/A
Report this Resource to TpT
Reported resources will be reviewed by our team. Report this resource to let us know if this resource violates TpT’s content guidelines.