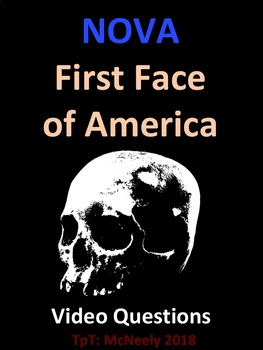 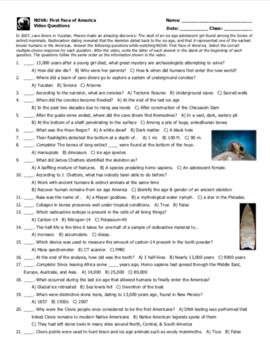 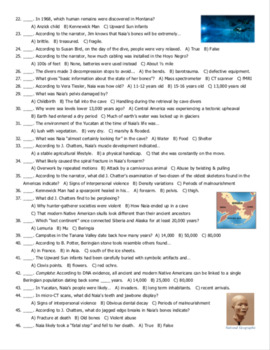 NOVA: First Face of America documents the remarkable discovery of Naia, the nearly complete skeleton of an ice age adolescent girl. Found in a flooded cave in Yucatan, Mexico, Naia represents one of the oldest humans unearthed in the Americas. Radiocarbon analysis indicates that she died nearly 13,000 years ago.

The two-sided video worksheet consists of 46 multiple-choice questions, and an answer key is included. The Zip file download contains files in both PDF and MS Word format. I am also including a QTI file of the video questions which can be loaded into an LMS such as Canvas or Moodle (useful for distance learning). You will need to obtain a DVD of the video or find an internet site for streaming.

A Google Forms, self-grading quiz of the video questions is available here.

The identity of the first Americans has long been a source of controversy and scientific inquiry. The discovery of the skeleton of Naia, an adolescent girl whose remains date back nearly 13,000 years, has shed much light upon this topic. Naia, named for a mythological water nymph, was found in a cenote, or flooded cave, in Yucatan, Mexico. The video documents the efforts of James Chatters and other scientists to retrieve and study Naia’s remains, and to place her in the context of the expansion of humans into North and South America.

Mexican cave divers discovered the flooded bone yard in 2007. They named it Hoyo Negro, or Black Hole, and its exploration was fraught with danger. Dozens of cave divers had perished in exploring such places. The cenote later became flooded as sea levels rose due to melting glacial ice. The cenote had once served as a burrow for prehistoric animals. It is likely that Naia had been exploring the cenote in search of water.

The video also documents the dramatic recovery of Naia’s skeleton from the flooded Hoyo Negro. Lights were installed using one-half mile of cabling. After a multi-stage dive, cave diver Susan Bird retrieved Naia’s delicate skull from the originally dark, 100 feet abyss. She lifted the skull and placed it into a meshed container for safe transport to the surface. The tension, and the relief after the safe recovery were palpable.

Naia tells a poignant story. She led a short, brutish existence in ice age America. Aged 15-16 years, her skeleton revealed periods of malnutrition, as well as physical abuse, and that she had already given birth. Her muscle development indicated a lifestyle of constant motion. Naia’s people may have been newly settled in the Yucatan region. Examination of Naia’s remains revealed that she had fallen to her death in the cave. Radiocarbon dating of one of Naia’s teeth provided her age of 13,000 years.

Modern humans, or Homo sapiens, left Africa about 80,000 years ago and spread throughout Europe and Asia. They eventually entered the New World about 15,000 years ago by crossing from Asia to North America through Beringia, a now flooded continental land bridge that once connected the two landmasses. Remains of campfires, and the burial of two children found at Upward Sun River in Alaska, date from these first settlers.

The location of Naia’s remains in tropical Mexico indicate a rapid expansion into the Americas. Before the discovery of Naia and other early human remains, scientists had proposed the first Americans to be the Clovis people, named for the distinctive and beautifully crafted spearpoints first discovered in New Mexico in the 1930s. The Clovis culture extended from North to South America. The spearpoints were used to hunt mammoths and other ice age megafauna. The Clovis age burial of the Anzick child is described in the video.