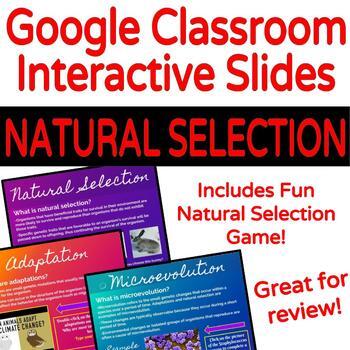 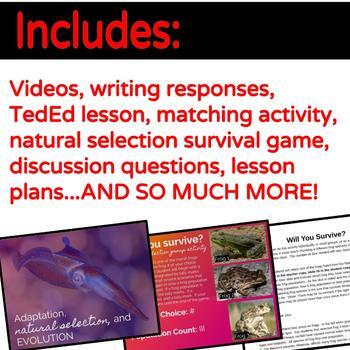 Christi Moore Resources
282 Followers
Follow
Made for Google Drive™
This resource can be used by students on Google Drive or Google Classroom. To access this resource, you’ll need to allow TpT to add it to your Google Drive. See our FAQ and Privacy Policy for more information.
DescriptionReviews10Q&A1

This Google Classroom resource is a great way for students to learn about adaptations, natural selection, and microevolution through peer interactions and technology integration.

In this lesson, students will:

-Watch a TedEd video about adaptations and natural selection

-Learn that adaptations and natural selection are forms of microevolution

Sometimes the differences in characteristics between individuals of the same species provide advantages in surviving, finding mates, and reproducing.

Natural selection leads to adaptation, that is, to a population dominated by organisms that are anatomically, behaviorally, and physiologically well suited to survive and reproduce in a specific environment. That is, the differential survival and reproduction of organisms in a population that have an advantageous heritable trait leads to an increase in the proportion of individuals in future generations that have the trait and to a decrease in the proportion of individuals that do not.

Adaptation also means that the distribution of traits in a population can change when conditions change.

Check out these other awesome Google Classroom Interactive Slides:

Ain't Nobody Got Time to Graph

Deck the Halls with Data Tables

I Like to Move It, Move It: A Google Classroom Lesson on Motion