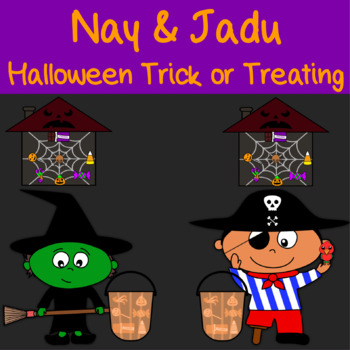 Nay and Jadu Halloween Trick or Treating, is a fun PowerPoint resource that could be used in your sessions.

The target is to be the first to fill your bucket with candies from the haunted house on top of you!

- Candy Image: Pick that specific Candy and put it in your bag.

- 2 : Pick two candies of your choice and put them in your bag.

- Empty Bucket: you fell and dropped all your candies!!! Put them all back and skip your turn.

The first player to put all their candies in their bag wins!

And since it's a PowerPoint file, it can be used for Teletherapy and for in-person by using an iPad or a computer.