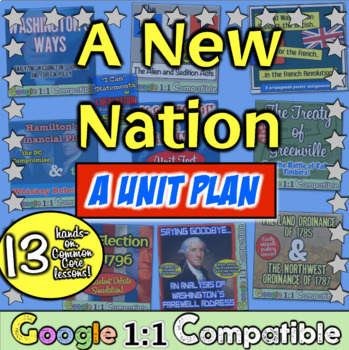 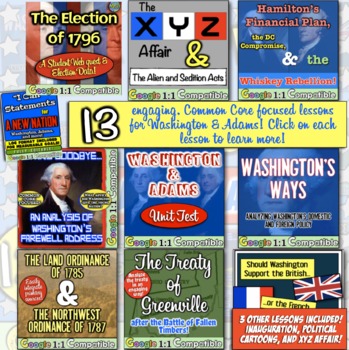 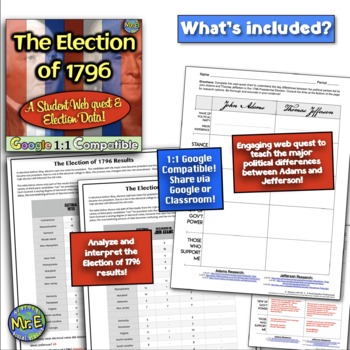 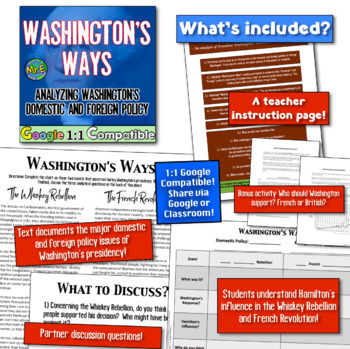 The New Nation Unit features 13 hands-on lessons and is structured around the pressing issues facing the first two presidents of the United States, George Washington and John Adams. This unit is priced to save you big! This New Nation also includes access to 1:1 Google compatible lessons -- just follow the included instructions (in the lesson folder) to access the Google versions, then share through Google or assign via Google Classroom!

Instead of paying over $32 if buying all of these resources separately, save 20% by buying this bundle!

✔ 1.) The Introduction of the First President. An PowerPoint that provides an introduction to the Presidency, the Presidential Oath, and an overview of the dilemmas facing the nation that will be explored. Plus, an awesome created video is included that showcases the inauguration oath!

✔ 2.) Hamilton's Financial Plan, the DC Compromise, and the Whiskey Rebellion!. Students learn about the crippling debt facing the young United States after the Revolutionary War and how Secretary of the Treasury, Alexander Hamilton, planned to pay it back! Of course, his plan angers many which results in the Whiskey Rebellion!

✔ 3.) Washington's Ways! The Foreign and Domestic Policies of Our First President! In this lesson, students are introduced to two key issues that took place in Washington's presidency, one domestic and the other foreign. Students learn about the Whiskey Rebellion, the French Revolution, and the decision-making of President Washington to deal with these two pressing issues!

✔ 6.) Should Washington Support the French or the British? A Propaganda Assignment! Students interpret primary sources and data sets to understand both sides to the argument of who to support in the French Revolution!

✔ 8.) The Election of 1796:A Student Debate Simulation! In this outstanding and interactive debate, students take on the role of either John Adams or Thomas Jefferson and conduct a live, in-class debate! Students first do background research (organizer included) to learn the foundation the newly-created Federalist and Democratic-Republic party. Then, students prepare for the debate!

✔ 9.) The XYZ Affair. With the included PowerPoint, students learn the basics behind the XYZ Affair, then students complete skits, jot down only the most important notes, then, watch a short video to cement learning on the XYZ Affair.

✔ 11.) Political Cartoons: Students create a political cartoon based on topics in this unit. Three levels of modification are included for all learners!

✔ 13.) New Nation "I Can" Statements & Learning Goals! Washington, Adams, Jefferson! A learning goal log and a set of "I Can" Statements are included in this unit (both in log format and in poster size) to track student learning! This log actually from from Washington to Monroe!

Are you interested in teaching Thomas Jefferson, James Madison, and James Monroe? Then check out the Jeffersonian America unit here!

Total Pages
125 pages
Answer Key
Included
Teaching Duration
2 months
Report this Resource to TpT
Reported resources will be reviewed by our team. Report this resource to let us know if this resource violates TpT’s content guidelines.