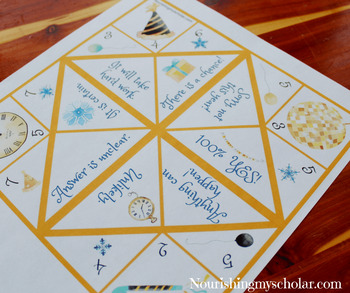 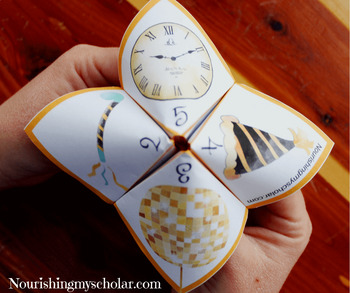 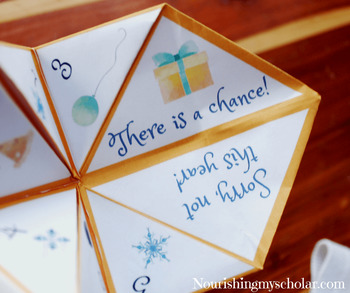 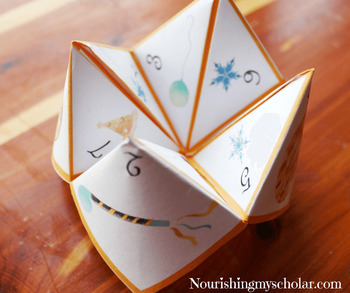 If you are looking for a game for the kids to play on New Year's Eve, then check out this paper craft!

This cootie catcher "magically" predicts the future. Ask it and question (like you would an eight-ball) and see what it reveals.

Once you print the pdf cut off the white edges of the square pattern.

With your pattern facing down, fold all four of the corners into the center. Be sure to watch your lines and try to make it as even as possible.

Turn your pattern over so that the phrases are facing up. Fold the corners into the center again to create a smaller square. Be sure to crease your edges.

Then, place your fingers into the bottom of the paper and pop it up to make four cone shapes. The New Year's Eve Cootie Catcher is ready to start predicting the future!

Repeat this process for a total of 2-3 times.

On the second or third selection, instead of counting out the numbers again, you will open the flap and read the prediction under the number/picture. These fortunes range from "It will take hard work," "It is certain," "Answer is unclear," "Unlikely," "Anything can happen," "100% YES," "Sorry, not this year," and "There is a chance."

This paper Fortune Teller will "Magically" tell the fortunes of kids and adults alike! I hope you have fun!
Total Pages
2 pages
Answer Key
N/A
Teaching Duration
N/A
Report this Resource to TpT
Reported resources will be reviewed by our team. Report this resource to let us know if this resource violates TpT’s content guidelines.