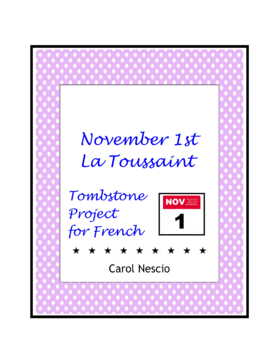 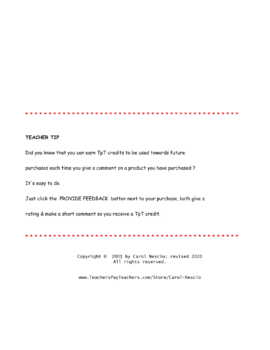 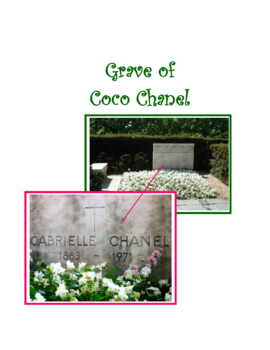 "On my tombstone I want written, 'He never did Love Boat'."

For La Toussaint students craft a tombstone out of a cereal box.

Students choose a French-speaking person or a French heritage American who is no longer living, research facts about that person, and then create a tombstone.

On November 1st you just set up 'the cemetery' of tombstones so students can walk through it, read each tombstone, and answer questions about the famous people buried there.

After that, students make a short oral presentation about their person while students fill in a category chart.

After the class activity on November 1st, this also makes a wonderful display in the school library.

Students do the research on their person during a class period, then use that information to create their tombstone at home using an empty cereal box that they've saved.

5. A tombstone template for the alternate version

6. A categorization sheet for class presentations

8. Photos of some outstanding student samples

9. A word search of famous names as a follow-up

10. A 24-page overhead about burial customs in France as well as a short history of the famous Père Lachaise Cemetery in Paris and some photos of famous tombstones.

We do the research part at least two weeks before the due date of the tombstones so students have ample time to do a nice job at home.

An Alternate Version is included, if time is short, whereby students take the information on their person and put it on a tombstone template on paper which they prepare at home.

Everything is ready-to-use so you can set this project in motion with ease.

You'll be surprised at how creative your students can be. (50 pages)

Another teacher, Karen H. of Ohio, has added a brilliant twist to this basic activity and buys black plastic tablecloths at a dollar store to put on the desks, puts black lights on the whiteboard ledges, places battery-operated tea lights around the tombstones, has the overhead on with a blue screen and the classroom lights off, and plays some spooky music such as 'Liszt's Danse macabre' or 'Marschner's Le Vampire' as students circulate to read the tombstones ... added touches that make for a memorable classroom experience for students.

Here's yet another music option:

Here is a short video clip of Rick Steves at

If you like my products, please follow me by clicking on the little star at the top under my name. Merci.

If you're looking for more time-saving materials, you may be interested in some other items in my store:

* The Use of tu * vous In French .. Useful for Distance Learning ..

over 90 cognates ~ nice for beginning students ..

* Wedding * Customs In France .. Nice to talk about a few days before La St.-Valentin. ..

* French Baby * Names .. It's free ~ Most students like the cachet of having a special French name

for French class ~ here are some easy-to-use A to Z lists for them to choose from ..

* The Food * Pac For French Class

* Feature * Film ~ Mona Lisa Is Missing .. She went missing from the Louvre for two whole years. Where was she ? Who took her ? This documentary explains it ..