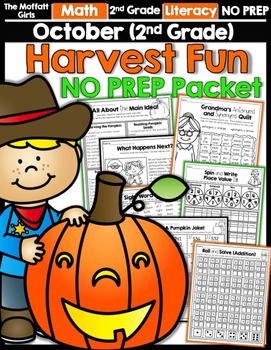 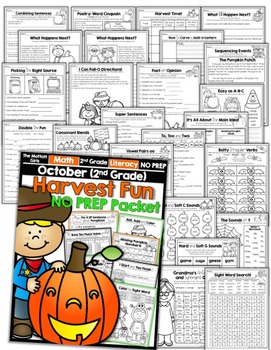 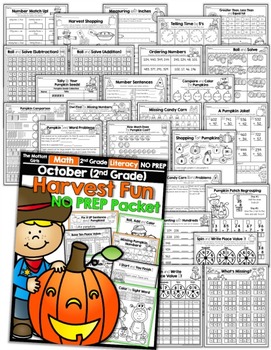 This October NO PREP Packet for 2nd Grade is FILLED with hands-on, engaging and FUN resources that cover core skills for 2nd Grade! The activities in this packet can be use for group work , centers, small groups, homework and more! The BEST part is that there is NO PREP! NO costly colored ink, NO laminating, NO cutting …. just PRINT!


*This packet is targeted for 2nd grade, but can be used for high flying first graders and struggling 3rd graders.
This packet includes the following resources:
*Grandma's Antonyms and Synonyms Harvest Quilt (color by the code).
*Hard and Soft G Sounds (color by the code)
*Hard and Soft C Sounds (color by the code)
*Vowel Pairs oo (Cut, Paste, Sort and write sentences)
*The Sounds of Y (long i and long e)
*Batty Irregular Verbs (present and past tense-irregular verbs)
*To, Too and Two (Fill in the sentence with the correct word)
*Consonant Blends (Riddles)
*Sight Word Search with all 2nd Grade Dolch Sight Words
*It's all About the Main Idea (Read the sentences and cross of the two that do not tell about the main idea)
*Super Sentences (Write adjectives to make the sentences better)
*Double the Fun - Double the consonant and write either ed or ing at the end of the word.
*Easy as ABC - Write the list of words in ABC order and write sentences.
*Fact and Opinions about Pumpkins
*I Can Fall-O Directions -Follow directions and add to the picture.
*Picking the Right Source (Read each clue and write the best resource for finding the information: dictionary, atlas, internet
*Sequencing Events - Read the short story and put the events in order.
*What Happens Next? Read the story and make a prediction as to what will happen next.
*What Happens Next? (Story number 2)Read the story and make a prediction as to what will happen next.
*What will Happen Next? Read the sentences and write two different things that could happen.
*Harvest Time ) Look at the foods (write words in the columns to describe what they look like, how they taste, how they smell and how they feel.
*How to Carve a Jack-o-Lantern Writing
*Poetry: Write a Word Cinquain
*Combining Sentences (Read the simple sentence and rewrite/combine them.
*Spin and Write Place Value I- Spin the hundreds, tens and ones to make and write a number.
*Spin and Write Place Value II- Spin and thousands, hundreds, tens and ones to make and write a number.
*Skip Counting in the Hundreds - Skip count by 2's with each set of numbers in the hundreds.
*Pumpkin Patch Regrouping - Add 2 and 1 digit numbers for simple regrouping.
*Candy Corn Word Problems - Use addition and basic regrouping to solve the problems. (Add a 1 digit number to a 2 digit number)
*Pumpkin Seed Word Problems - Solve the word problems (includes expanded form, addition, greater than less than, double digit addition with no regrouping and subtraction)
*How much does the pumpkin cost? Count the coins to find out how much each pumpkin cost.
*Shopping for Pumpkins - Answer the questions (compare, add and subtraction) to find the cost of each pumpkin.
*A pumpkin Joke - Add two digits to a three digit number with no regrouping. Use the letters to solve a pumpkin riddle.
*Missing Candy Corn - Write the missing numbers (up to 100) in each row of candy corn to complete the number line.
*Owl Find the Missing Numbers - Write the missing numbers on each pumpkin to complete the pattern. (Numbers in the hundreds)
*Pumpkin Comparison- Count the hundreds, tens and ones in each group to write the sign <, >, or =.
*Compare and Color the Pumpkin - Compare each set of pumpkins with numbers up to 1,000 and color by the code.
*Number Sentences - Complete each number sentence (i.e. 1 more, 1 less, 10 more, 10 less, 2 more, 2 less, 20 more, 20 less)
*Tally up Your Seeds - Read the clues to help you complete the tally chart and and answer the questions.
*What's Missing? - Fill in the missing numbers to add three digits to three digits with no regrouping.
*Roll and Solve - Roll the die and count a set of coins in the column. Write the total.
*Ordering Numbers - Put the numbers (in the hundreds) in order from least to greatest.
*Roll and Solve (Addition) - Roll a die and solve an addition problem in that column (no regrouping).
*Roll and Solve (Subtraction) - Roll a die and solve an addition problem in that column (no regrouping).
*Greater Than, Less Than and Equal to- Compare each set of numbers, fill in your own set of number to make the sentence true and write the numbers from greatest to least.
*Telling Times by 5's - Read the time on each clock. Write the digital time.
*Measuring with Inches - Use the inch ruler to measure each item.
*Harvest Shopping - You have a specific amount of money to spend in the store. Discover 4 different ways to spend the money and write the items you could buy.
*Number Match Up - Read the number words and match the number.


If you like this NO PREP 2nd Grade packet, you may also like the following:
I Can Read Simple Sentence NO PREP The BUNDLE!)
Word Work The BUNDLE!)
Addition and Subtraction up to 20 - The BUNDLE!)


Be sure to follow our TPT store and...
The Moffatt Girls on Facebook for EXCLUSIVE Fan FREEBIES!
Total Pages
55 pages
Answer Key
N/A
Teaching Duration
N/A
Report this Resource to TpT
Reported resources will be reviewed by our team. Report this resource to let us know if this resource violates TpT’s content guidelines.