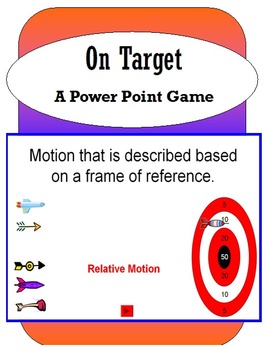 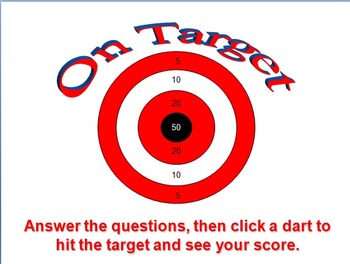 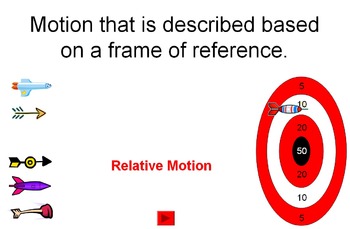 Students resist reviews. They’ve learned it all once. Why should they bother going through it again? With On Target, a fun competitive game, students want to master skills in order to surge ahead of the competition to win.

Don’t have the time?

With this pre-prepared game template, teachers just start Power Point, open the file, add questions and answers tailored to meet their needs, and the game begins.

How to play On Target:
1. As many as six teams take turns answers questions.
2. Each team to answer correctly clicks on one of six different “darts” to throw it at the target.
3. Points earned are determined by where the dart hits the target.
4. The team that accumulates the most points by the end of the game wins.
NOTE: Encourage teams to select a different dart each time instead of assigning them a specific dart.

A “How to Play” slide appears on the last slide of the game.

Score Keepers
These PowerPoints serve as a score keeper or as a way to determine how many points students have earned for a correct answer. The questions for these games come from another source (worksheet, orally, etc.).
Chomp Champ
Bookworms
Biggest Drip
Dots
Build a Bug
Super Poppers
Plink
Connect 5
All Smiles

All-In-One Games
The questions for these games are typed as part of the PowerPoint.
Bit of a Yarm
Triangle Trivia
Tiger or Treasure
The Old Shell Game
On Target
Down the Hatch
Fruit Basket Turn Over
Football Fan
Gumball Geyser

All 18 games are also available in this mega-bundle!
18-Game PowerPoint Bundle