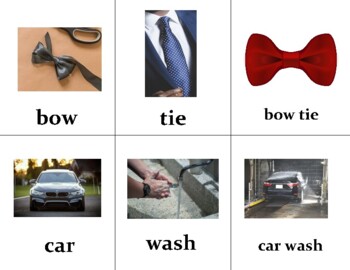 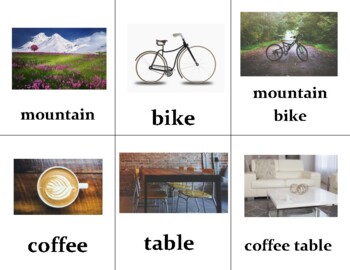 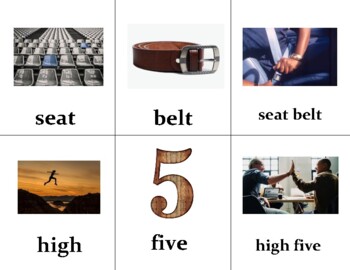 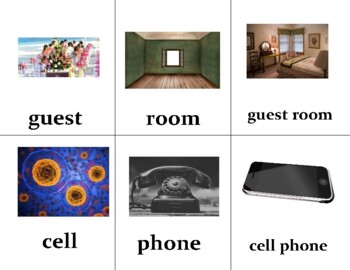 We practice compound nouns a lot, but how often do we talk about open compounds? My students tend to have trouble identifying open compounds as nouns. They like to label them as two separate nouns or, more often, as an adjective and a noun. Since there is sometimes controversy over whether a compound noun should be closed, hyphenated, or open I let Merriam Webster’s Dictionary be the final determiner. If that dictionary listed the noun as a single entry and did not close or hyphenate it, I included it. This set of flashcards (word-word-compound of 40 different compound words) can be used in a variety of ways. Students can match the cards to form sets of compound words (word 1 + word 2 + compound word). They can also play a Memory-style game where they turn over three cards and see if they match. My students’ favorite way to use them though is playing Spoons.

Materials required but not included: Spoons

(You’ll need one fewer than the total number of people in each group; so if you have 28 students in groups of four, that’s seven groups, three spoons per group, a total of 21 spoons)—plastic spoons can be used, but I highly recommend using metal spoons. The plastic ones tend to break with more energetic groups and can have sharp edges when they do. You can get cheap metal spoons at dollar stores, Salvation Army, Good Will, garage sales, and a host of other places.

1. Print the cards, you’ll need one set for each group. I highly recommend printing on heavy cardstock and laminating them for durability (cold lamination is great and does not peel when cut through). They will get a bit beat up in this game. I also recommend printing each set of cards on a different color of cardstock. This will help you know which set a card belongs to when you find it on the floor later.

3. Give each group a set of cards and spoons (one less spoon than the number of students in the group).

Object: Try to collect a compound word triplicate (word one, word two, compound word). Once a triplicate is collected, that player takes a spoon from the center of the table (he/she can be sneaky about it, taking the spoon and continuing to play). After one player has taken a spoon, all other players race to get a spoon as well. The player without a spoon gets a letter. Any player who spells S-P-O-O-N is out. The last player standing is the winner.

How to play Spoons:

1. Place the spoons in the center of the group, use one less spoon than the number of people in the group (so a group of four students would use three spoons).

2. Deal out three cards to all players. Players look at their own cards but no one else’s.

3. Place all remaining cards in a face-down pile next to the dealer.

4. The dealer picks up the top card, looks at it, and decides to keep it or pass it.

5. The dealer passes 1 card (either the one from the pile or one from his/her hand) to the person on his/her right.

6. As cards are passed, students look at them one at a time, and pass one card (either the one viewed or one from the hand) to the next player. The last player places the cards in a discard pile next to him/her.

7. If the draw pile runs out, pause and reshuffle the discard pile to form a new draw pile.

8. Once a player has collected a compound word triplicate (word one, word two, compound word), he/she takes a spoon from the center of the table. It is acceptable, even encouraged, to be sneaky about it, continuing to play if no one sees the player do it.

9. After one player has taken a spoon, all other players race to grab a spoon as well.

10. One player will not be able to grab a spoon. That player receives a letter.

11. Any player who collects all of the letters to spell S-P-O-O-N is out of the game.

12. The last player in the game is the winner.

Alternative play: Have a group of students that is not quite as competitive, or just prefer a less energetic game? Try these alternate rules.

Object: Collect compound word triplicate (word one, word two, compound word) and be the player with the lowest score at the end of the game.

1. Shuffle the cards and deal out three cards to each player. Players may look at their own cards only. Place remaining cards face down in the center of the table. Turn the top card over, place it face up next to the draw pile to form a discard pile.

2. The first player takes a card to form a hand of four cards. He/she may choose the top card from either the discard or draw pile.

3. The first player discards a card to bring his/her hand back down to three cards.

4. The second player then takes his/her turn by taking and discarding a card.

5. When a player has collected a compound word triplicate (word one, word two, compound word), he/she lays down all three cards in front of him/her and discards a final time.

6. All remaining players get one more turn to try and form a triplicate.

7. Score the round by giving players points for the three cards remaining in their hand:

Any player who successfully collects a compound word triplicate scores zero points for the round.

Log in
to see state-specific standards (only available in the US).
CCSSL.2.4d
Use knowledge of the meaning of individual words to predict the meaning of compound words (e.g., birdhouse, lighthouse, housefly; bookshelf, notebook, bookmark).