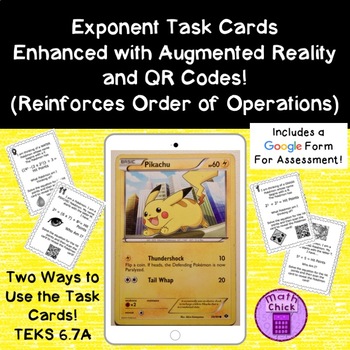 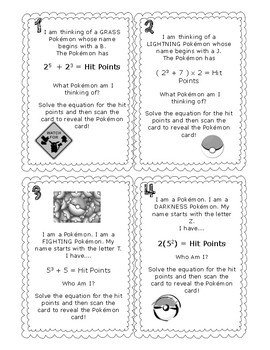 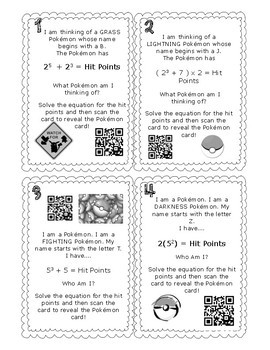 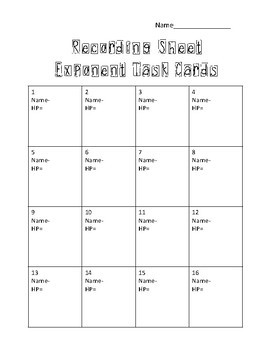 Appeal to your students interests with task cards that feature their favorite Pokemon Cards!!! These amazing, technology enhanced task cards are designed to help your students review, enrich and practice math content while integrating technology! These task cards focus on TEKS 6.7A- Generate equivalent numerical expressions using order of operations, including whole number positive exponents and prime factorization (Prime factorization is not seen in this product)

The first 16 cards are designed to help strengthen their math skills. Students will enjoy solving equations with exponents and then using Augmented Reality to reveal the answer, or secret Pokemon card!! If you have never used AR or Augmented Reality, it is much like a QR Code but BETTER! Students will instantly receive feedback on their answer as the task card COMES TO LIFE with AR!

The second 16 cards are the EXACT same cards but with QR Codes instead of Augmented Reality. The students solve the equations with exponents and then scan the QR code to reveal the secret Pokemon card!

This download also comes with a recording sheet, answer key and GOOGLE FORMS QUIZ that you can use as an exit slip or quick check!

The download also comes with directions on how to install the Aurasma App and how to start immediately using the amazing AR embedded task cards!

Task cards are a brilliant alternative to a boring worksheet, NOW with Augmented Reality or QR Codes you can also integrate technology!

The Aurasma app can be done on any tablet, smart phone or ipad!

*CAUTION: laminating the cards often times causes glare and the scanner will have trouble scanning the pictures for the Aurasma App.