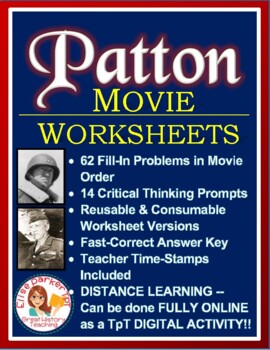 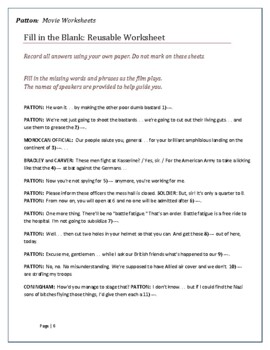 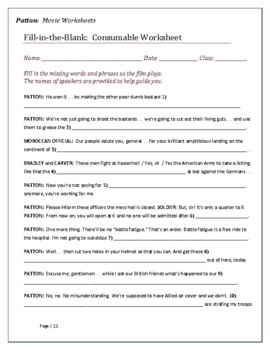 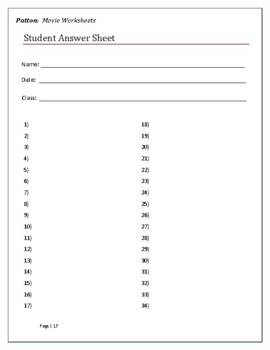 Teaching with movies can open students' eyes to a whole new world and make history seem a lot more relevant, not to mention alive! For teachers, though, there is always the question of how to hold the students accountable for what they are watching.

These worksheets, designed to go with the award-winning motion Picture "Patton," starring George C. Scott, will do more than help hold students responsible for paying attention. They will also guide students through the movie, pointing out key sections of dialog in order to cue students to a better understanding of essential plot elements and supporting details.

The Patton Movie Worksheets and Guide consist of:
---Reusable cloze worksheets that take students through the entire movie from start to finish. These worksheets can be copied off and then used with multiple classes across multiple years to save you not only paper and ink, but also your valuable time!
---Parallel consumable worksheets in case you prefer to let students write on the xeroxes you make. For special needs students, this may be the better option.
---A full-context answer key that makes discussing the right answers a snap.
---A simplified answer key to help with fast and easy correcting.
---A full page of essay and discussion topics to help students dive deeper into the film's themes. These topics are ideal not only for traditional essays, but also for all kinds of projects and debates that students can do collaboratively to build their critical thinking skills.

Topics Covered in these Patton Movie Worksheets
"Patton" is one of those movies that has stood the test of time. A true classic, it delves into a variety of issues that are hugely important to a good understanding of 20th century history. The film does an excellent job of examining these topics, among many others:

Along the way, the film explores essential issues such as
--- The nature of war.
--- The leadership style of Patton versus other generals in the Allied command.
--- The responsibility a commander owes to his troops.
--- The conflict between following orders and being true to one's own principles and beliefs
--- The question of courage -- or the lack of it -- under fire.

These issues -- and many others -- are explored in depth via the essay and discussion questions included in the movie guide.

As a teacher myself, I can attest to the usefulness of the film for history classes. One more reason it is so great? The vast majority of students have never seen it before, making it a new experience that teachers can share with them and then use to build a strong foundation of knowledge about this key period in world and American history.
Total Pages
22 pages
Answer Key
Included
Teaching Duration
1 Week
Report this Resource to TpT
Reported resources will be reviewed by our team. Report this resource to let us know if this resource violates TpT’s content guidelines.