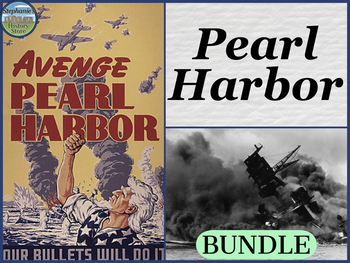 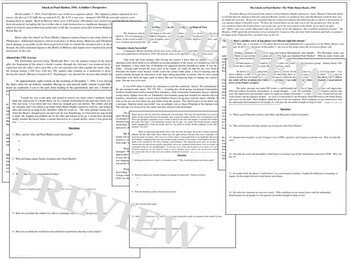 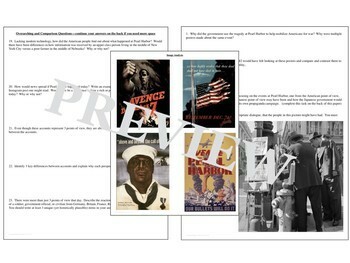 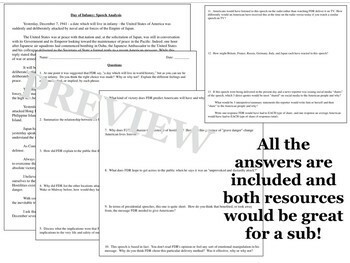 These three resources will teach students about the events at Pearl Harbor, help them review it, and give them different points of view of that day. It also introduces the effects of the bombing of Pearl Harbor with a Japanese Internment Webquest. In the first resource, students read 3 accounts of Pearl Harbor from the point of view of an American soldier, a Japanese bomber, and the White House, answer 23 questions, and compare and contrast the three accounts. Two questions have students connect the material to today. They also complete an image analysis section on 5 images and create two of their own propaganda posters. In the other resource, they analyze FDR's Day of Infamy speech by answering 10 academic questions and completing 3 creative tasks. The webquest includes 4 websites, one TedTalk, and 28 questions/tasks. The answers are included where appropriate and these resources would be great for a sub!

--What is the Arizona a memorial of today?

--How do you think the soldier was able to seemingly stay calm until he got in the water?

--Inferring from the text, what is a "circuitous route?" Why would that choice have been made?

--Why did Germany and Italy declare war on America after Pearl Harbor?

--Describe the scene and atmosphere when Grace was trying to get all the information to present to FDR. Why was this so?

--In another draft, the phrase "world history" was used instead of infamy. Explain the difference in meaning, or impact, for the reader between world history and infamy.

--Why did the government use the tragedy at Pearl Harbor to help mobilize Americans for war? Why were multiple posters made about the same event?

--How did FDR explain to the public that the attack was pre-determined?

--What kind of victory does FDR predict Americans will have and why?

--Why does FDR emphasize the existence of hostilities? How will this presence of "grave danger" change American lives forever?

--How might Britain, France, Russia, Germany, Italy, and Japan each have reacted to this speech?

To recap, this includes: