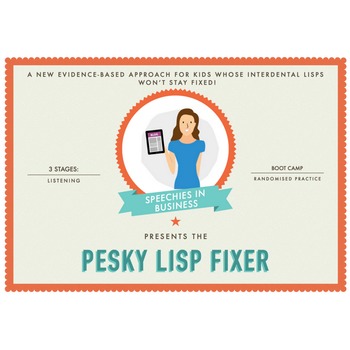 To fix an interdental lisp - those lisps where your tongue sticks out between your teeth when you try to say /s/ - speech-language pathologists used to start with simple tasks, like saying an /s/ on its own. Once the child had mastered their /s/, we progressed in tiny hops (like baby bunny kittens) to slightly harder tasks. This traditional approach works.

But it's SO SLOW!

Many kids - particularly older and more mature kids - hate being treated like babies. And, even after finishing traditional treatment, many kids have difficulties using their "new /s/" on words they haven't practised and in more natural tasks, like story-telling and conversation. Which is, of course, the main point of trying to fix a lisp!

More recent research evidence supports a different route for better results. Once a child can say the sound on his or her own, randomly mixing up hard and easy tasks can have quicker results that transfer more efficiently to real-world, lisp-free speech (e.g. Skelton, 2004).

1. Auditory Bombardment: 2 minutes per day - listening and tuning into the sound and practising it on its own. Audio file included!

2. Our /s/-Syllable Boot Camp: Based on principles of motor speech, the boot camp involves 10-15 minutes a day of high repetition practice of nonsense syllables designed to get the tongue, lips and teeth working together with different vowel and consonant sequences in random order.

3. Randomised Practice: Once you’ve conquered the boot camp, this gives you 20-30 minute sessions of imitating and naming words with /s/ in them, across all word positions. Again using a high repetition, randomised approach, we mix imitation, naming, and sentence generation tasks, with old-fashioned story telling, using over 200 high quality photographs - no cutesy vector clip art.

This program works best if an adult is around to give clear feedback every now and then - but no more than occasionally.

So download the Pesky Lisp Fixer today and get straight into getting rid of that pesky lisp!
Total Pages
38 pages
Answer Key
N/A
Teaching Duration
N/A
Report this Resource to TpT
Reported resources will be reviewed by our team. Report this resource to let us know if this resource violates TpT’s content guidelines.