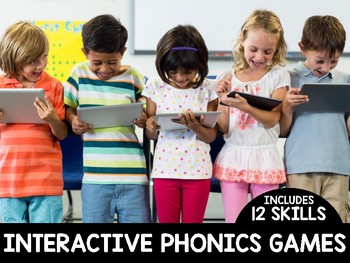 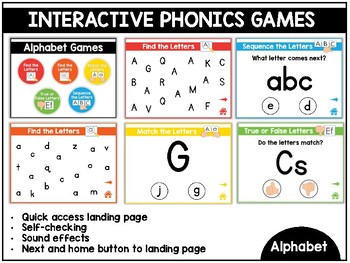 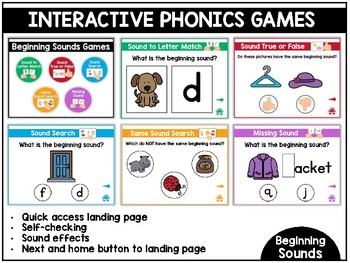 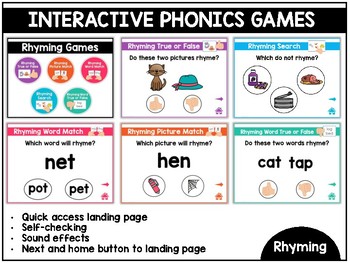 Phonics Interactive Files: games that can be used whole-group and independently to engage students in phonics instruction!

**THIS PACKET RECEIVED A FREE UPDATE! ALL OF THE GAMES ARE NOW AVAILABLE IN A GOOGLE SLIDES VERSION ALONG WITH THE POWERPOINT SHOWS! EACH GAME IS OFFERED AS A SEPARATE GOOGLE SLIDE FILE!** >>> VIEW A PREVIEW VIDEO OF THE GOOGLE VERSION HERE <<<

>>>WOULD YOU LIKE TO IMPLEMENT ALL OF THE GAMES IN SEESAW? SURE THING WATCH THIS VERY INFORMATIVE TUTORIAL VIDEO HERE <<<

Do you have a quick moment? Watch **THIS** quick video to see the interactive phonics games in ACTION WITH POWERPOINT!

What phonics skills are included? There are FIVE games per skill below!

How do I best use these files?

These files can be used for independent practice and whole-group! The games work great for student independent work but can be played whole-group as well! You can use these files right alongside your whole-group phonics lesson. The slides are broken down to cover a range of the lesson! This will help you to use the files through the lesson but not all at one time! The games will be able to be used throughout the year! This will help to keep the kiddos engaged for snippets through the lesson!

What kind of program do I need for these to work?

These games are super simple to open on your device! They are PowerPoint files and can be used on ANY device that has PowerPoint on it! Your device (laptop, I-pad, computer, etc will need PowerPoint! You can then use them on your interactive devices. **THIS PACKET RECEIVED A FREE UPDATE! ALL OF THE GAMES ARE NOW AVAILABLE IN A GOOGLE SLIDES VERSION ALONG WITH THE POWERPOINT SHOWS! EACH GAME IS OFFERED AS A SEPARATE GOOGLE SLIDE FILE!**

Thanks so much to Kari Bolt and Whimsy Clips for the beautiful clips!

Please email me at littlemindsatworkllc@gmail.com

Would you like to receive notifications for my newly released packets and upcoming sale? Be sure to FOLLOW ME here on TPT!