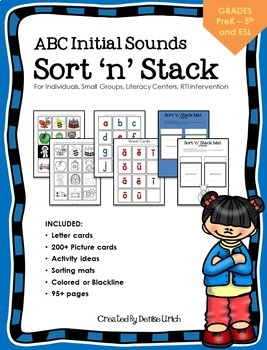 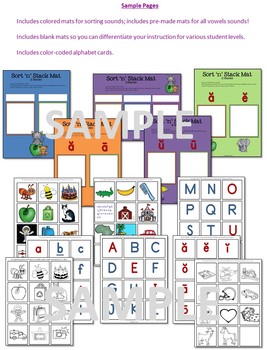 This product has identical content as Phonics & Phonological Awareness Pocket Chart & Center Sorting and Letter Houses, minus the letter houses.

Plus, includes a Phonological Awareness activity list for whole class and centers, plus the activity instructions rewritten from the Reading First booklet. This requires listening skills using your voice and the pocket chart picture cards, not reading or writing skills or the letter cards.

You will get (In Color):

You will get (In Black and White)

Phonemic Awareness Activities You Can Do:

Log in
to see state-specific standards (only available in the US).
CCSSRF.1.2c
Isolate and pronounce initial, medial vowel, and final sounds (phonemes) in spoken single-syllable words.
CCSSRF.1.2a
Distinguish long from short vowel sounds in spoken single-syllable words.
CCSSRF.1.2
Demonstrate understanding of spoken words, syllables, and sounds (phonemes).
CCSSRF.K.3b
Associate the long and short sounds with common spellings (graphemes) for the five major vowels.
CCSSRF.K.2d
Isolate and pronounce the initial, medial vowel, and final sounds (phonemes) in three-phoneme (consonant-vowel-consonant, or CVC) words. (This does not include CVCs ending with /l/, /r/, or /x/.)