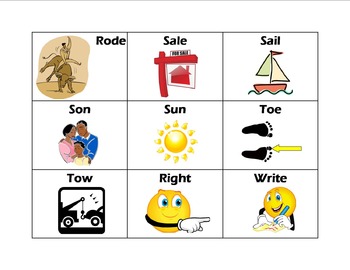 These cards include 44 pairs of homophones and two Old Maid cards. The cards can be used to play several different games:

Old Maid: divide students into groups of 4. Give each group half the cards (22 matched pairs) and one Old Maid card. Students pass out the cards as evenly as possible. On his/her turn a student draws a card from the hand of the person next to him/her and lays down any matches. The next student then takes a turn. Play continues until all matches have been made and one person is left with the Old Maid. The game can be increased in difficulty by requiring students to use each word in a sentence before laying down a matched pair.

Snap: Two students divide the cards (minus the Old Maid cards) between themselves. They then turn over one card each at the same time. If the cards match the first student to say “SNAP” gets to take all of the cards from both piles. The goal is to have the most cards at the end of the game.

Memory: Divide the cards (minus the Old Maid cards) into two sets, being sure the matched pairs end up in the same group (so each group will have 22 matched pairs). In groups of 3-4, students then mix the cards and lay them out face down on the table. Students take turns turning over two cards. If the cards match, and student can use both words in sentences, the student takes the match and goes again. If the cards do not match, or the student cannot use both words in sentences, the cards are turned back over and play continues.

Pirate Homophones: Are, Our, Hour (paper)

Pirate Homophones: Are, Our, Hour (digital--Slides)

Pirate Homophones: Are, Our, Hour (digital--PowerPoint)

Whose or Who's Triple Play (paper)

Whose or Who's Mystery Pixel Art (Sheets)

Whose or Who's Mystery Pixel Art (Excel)

Homophone Sghoul: Commonly Confused Words There, Their, They're