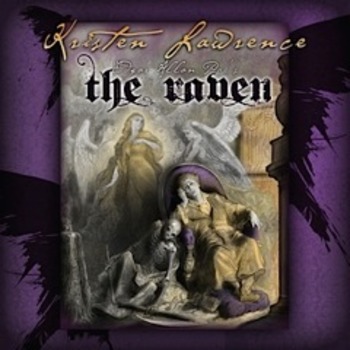 Guiding Question: What do poetry and music have in common?

Edgar Allan Poe's famous poem, “The Raven,” is noted for its lingering rhythms, sonorous rhymes, and Gothic themes. Sounds musical, doesn't it? But these are literary devices that were used in creating the mood in his poem. Note that both writers and composers have similar guidelines to follow and techniques to use.

Poe declared in his essay, "The Poetic Principle": "It is in Music, perhaps, that the soul most nearly attains the great end for which, when inspired by the Poetic Sentiment,.. And thus there can be little doubt that in the union of Poetry with Music in its popular sense, we shall find the widest field for the Poetic development."

Application: Hold a Birthday Party for Poe (January 19) and sing "The Raven" to him. (words and music on Kristen Lawrence CD - purchase at Amazon, CD Baby, or iTunes)

Included in lesson plan:
- Activities: Discussion, Comparisons, Sing Along
- Definitions and examples of Literary Terms used In Edgar Allan Poe’s poem “The Raven”
- Definitions and examples of music terms used in the musical setting of Kristen Lawrence’s “The Raven”
- Copy of the version of poem used in the musical setting (Poe changed his poem over the years)
- Background reading and resources on Poe and "The Raven"

* Music -"The Raven" by Kristen Lawrence CD or MP3 can be purchased through Amazon, iTunes, or CD Baby.
- Simplified piano sheet music is also available for purchase.

NOTE: Kristen Lawrence's music, “The Raven,” has been used in several cities’ presentations of THE BIG READ: The Short Stories and Poems of Edgar Allan Poe, sponsored by the National Endowment of the Arts to encourage reading, art, music, through performances of Poe’s works in the community. She also lectured AP music classes about the music and theory in her musical setting and composition.