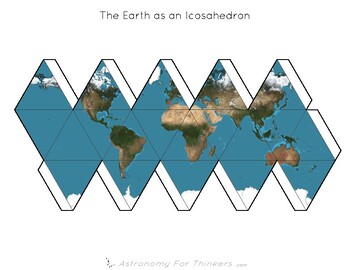 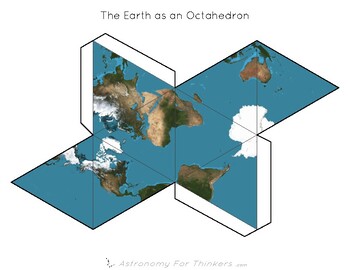 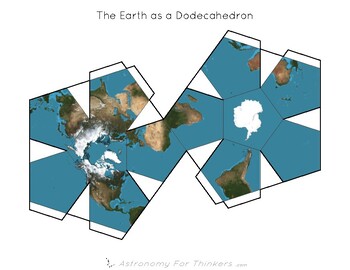 This PDF file contains templates to be printed, cut out, and folded into various polyhedra. Four of the simplest polyhedra are the cube, the octahedron, the dodecahedron, and the icosahedron, and I have included blank versions of all of these.

The cut lines are thick and black, and the fold lines are thin and gray. I recommend printing the designs onto card stock, and scoring the fold lines with a dull edge of some kind before cutting out the shapes, to help make crisp folds. Folding the paper into shape should be relatively straightforward — just make sure the imagery is on the outside and the tabs are on the inside. I recommend gluing the tabs in place with glue sticks rather than taping with scotch tape. The results are prettier and more sturdy. Unfortunately, gluing the final tabs in place is always a bit awkward. Liquid glue helps here.

The Earth As Various Polyhedra

The cube and the octahedron don't resemble a sphere very well, but I thought I'd try making globes out of them all just for fun and for comparison. I found that the cube is actually not quite as goofy as I thought it would be — it gives you broad uninterrupted flat maps to study, and still keeps all the parts of the world in relatively good relative arrangement. The octahedron is too pointy. My favorite shape for a polyhedral globe is a toss-up between the dodecahedron and the icosahedron. The icosahedron is fairly easy to make, and it resembles a sphere better than the others. But the poles are pointy, and I find all those faces and edges to be a little distracting to the eye. It's too easy to focus on the shape rather than the map. The dodecahedron is the most bothersome to make, but it gives broad maps to study, and the poles are flat, which I like visually, and it also allows you to rest the globe in a straight up-and-down position. This is one of those issues where I expect different people will have different preferences. For most of the imaged globes, I have created both dodecahedral and icosahedral versions.

One of the main motivating factors for me to work on these polyhedra was so that I could make paper celestial spheres, so naturally I created celestial sphere versions of polyhedra. There are two versions here, one inside-out, and one "normal". The trouble with making globes to represent the map of constellations surrounding us, is that we are inside this "celestial sphere", looking at it from the interior. When we make an artificial model, a physical globe of some kind, we are normally on the outside looking in. So with the celestial sphere, we have a choice. We can draw everything on the globe "properly", and then either try to find a way to view it from the inside, or look at it from the outside and just put up with having all the constellations look backwards. Or we can draw the celestial sphere "backwards" to start with, so that the constellations would look reversed if we were actually on the inside, but they will look "right" when we look at them from the outside.

The second of the two dodecahedra is drawn without the outer tabs, and is meant to be folded so that the stars are on the inside. The result after fastening the tabs in place (on the outside—this is an exception to the normal rule) will be a sort of "clamshell" that can open and close, and that lets you look at the stars from the "inside". The first of the two dodecahedra is meant to be folded and fastened just like all the other dodecahedra here, making a complete "sphere", with the stars on the outside.

The Earth, The Moon, and Mars to Scale

Since I have decent source imagery for the Moon and Mars, I included polyhedra for these, as well. In addition to "normal size", I really wanted to make a set of globes showing the Earth, the Moon, and Mars to scale, all at their relative sizes, so you could set them side-by-side and see how they compare. If you could make three such scaled globes, what do you think they would look like?

What about distances? If we want to take our paper globes for the earth and moon, and put them the right distance apart, how far apart should we put them? Can we arrange our models so that the distance between them is to scale, too? And what about the sun? How big and how far would a model for that have to be?

I have included templates at the end of this file for making icosahedra of the Earth, the Moon, and Mars, all to scale. If we take the "diameter" of the icosahedron as the distance from one point or vertex to the opposite vertex, then the diameters of the earth and moon given here are 5.7" and 1.56" respectively. (Mathematically, this is the diameter of the "circumscribed sphere", i.e. the sphere touching all the vertices of the icosahedron.) If we take these diameters as equivalent to the diameters of the planetary spheres, and scale the distances to these diameters, then the moon and earth should be placed 14 feet plus a few inches apart. Unless you are in a large auditorium or something, you need to place them on opposite sides of the room. The sun would have to be nearly 52 feet across — maybe the size of your house — and it would have to be about 5600 feet away — over a mile, perhaps the distance from your house to the nearest Starbucks. If you do imagine such a sun somewhere, imagine the globe for Mars about a mile and a half from it — about 8500 feet.