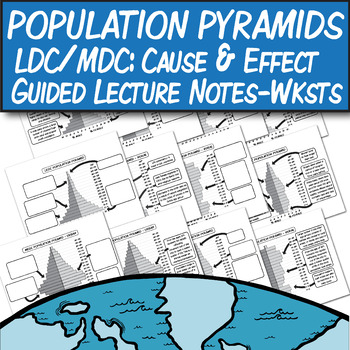 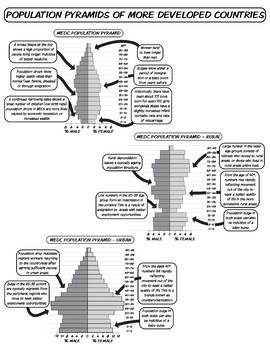 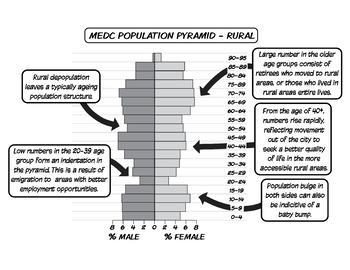 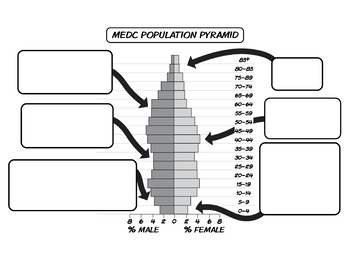 If you are eager to show kids how social, political, and economic factors play a role in the demographics of a country, particularly to contrast lesser developed and more developed countries, look no further.

There are 16 pages of guided lecture notes and blank worksheets for you and your students to work with.

There are also worksheets with all three LDC and MDC population pyramids on one page, respectively.

Hand out the blank population pyramid worksheets for LDC and MDCs and have students complete it with your guided lectures. Or, have students hypothesize the causes for the bumps and dips that they see in the pyramids.

Looking for other Population Pyramid Resources?

Looking for other lessons that deal with demographic shifts?

This item was created using Adobe Illustrator, and Autodesk Sketchbook by the Human Imprint.

Any earnings from the sale of my other maps and lessons helps pay for professional illustrations that I have made for my online illustrated comic text about Human Geography. $$

Let me know if I can make this better! Any corrections or new editions will notify buyers for re-download opportunity.

All works are meant for the purpose of the classroom and personal use. Downloaded materials are not meant to be redistributed via social media or in shared file folders (i.e. Dropbox, Google Drive, etc.), aside from those that are shared with students (i.e. Schoology, Google Classroom, or other closed LMS). Please do not post any of my downloaded illustrations to publicly viewable websites where others can download, including publicly viewable websites meant for students.