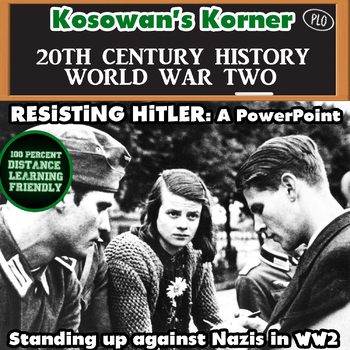 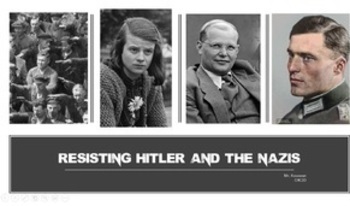 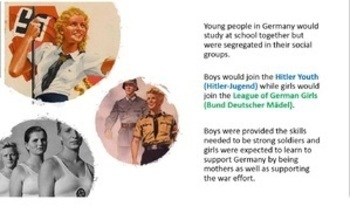 This PowerPoint examines the different ways that German Resistance manifested itself during the rule of Nazi Germany.

Part One: Children and Youth Groups
Focusing on Hitler's organization of youth groups, Student advocates and the resistance of young people.

Looking at the role of the Christian churches of Germany and how some, like Bonhoeffer, stood up against the government while others collaborated willingly.

Looking at the conspiracies set forth by the Wehrmacht and how they tried to kill Hitler, specifically emphasizing Operation Valkyrie.

Looking at the motivations and success of the different resistance groups in Germany.

PowerPoint can be taught over 1 or 2 periods, depending upon pacing, available time and/or student questions, opportunities to expand learning.

Total Pages
44 pages
Answer Key
Does not apply
Teaching Duration
90 minutes
Report this Resource to TpT
Reported resources will be reviewed by our team. Report this resource to let us know if this resource violates TpT’s content guidelines.