Preamble to the Constitution Scenario Match: Practice for Civics and History! 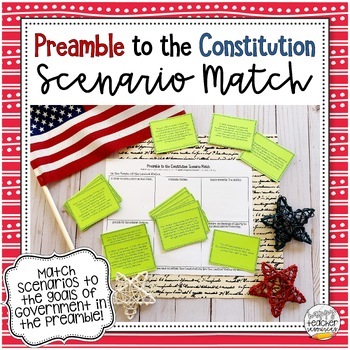 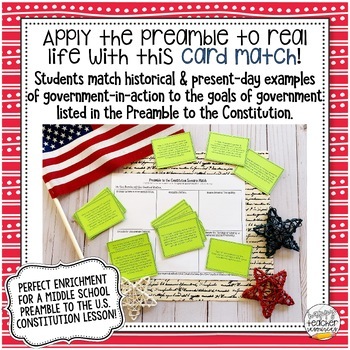 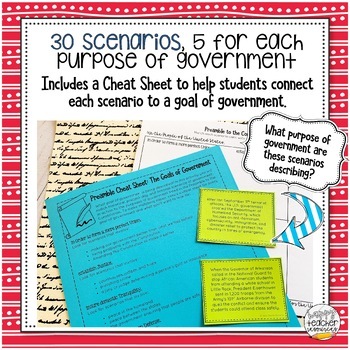 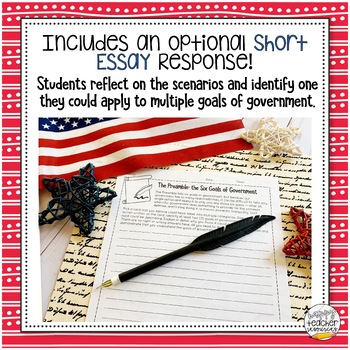 Do your students need extra practice understanding the Preamble to the Constitution? Reinforce the six goals of government by playing this Preamble Scenario Match!

This Preamble matching activity, which comes with an optional short essay response, has students match thirty examples of government-in-action (some pulled from the history books and today's headlines!) to the six purposes of government listed in the Preamble to the Constitution. Aligned to Florida State Standards for 7th Grade Civics, SS.7.C.1.6: Preamble of the U.S. Constitution, this is a great enrichment activity for middle or high school Civics, American Government, or American History classes studying the United States Constitution.

This activity allows students to think critically about how real actions by the U.S. government fulfill the various goals of government laid out in the Preamble, showing the Constitution at work throughout history and into the present day.

This resource comes as a non-editable PDF and includes an Answer Key!

✩ Government In Action | Preamble to the Constitution Activity

✩ We the People | Preamble to the Constitution One-Pager Activity

Follow Happy Teacher Resources so you're the first to find out about new products!

Total Pages
13 pages
Answer Key
Included
Teaching Duration
30 minutes
Report this Resource to TpT
Reported resources will be reviewed by our team. Report this resource to let us know if this resource violates TpT’s content guidelines.