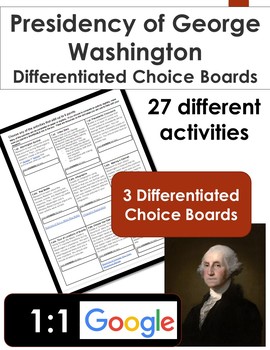 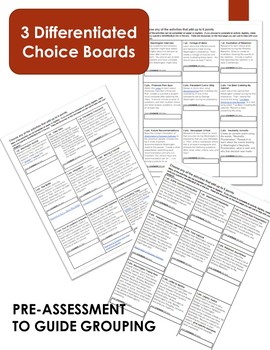 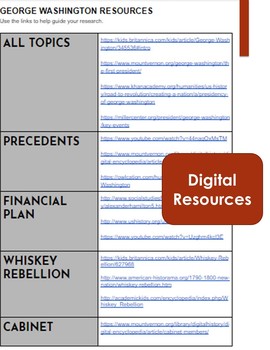 Differentiate your lesson on the presidency of George Washington with this set of three engaging choice board menus. Students are able to research a variety of resources to learn precedents set by George Washington, the creation of his cabinet, putting down the Whiskey Rebellion, development of Hamilton's financial plan, taking a stand with the Neutrality Proclamation, and his Farewell Address to the American people. They then apply that learning to complete a variety of activities of their own choosing to earn 6 total points.

The choice board menus can be used as a stand-alone activity to lead students through learning about Washington's presidency, as a supplement to instruction, for homework or extension activities, or as an assessment.

Twenty-seven different activities are included within the three differentiated menus, including creating infographics, making a cabinet today, developing a crossword puzzle, analyzing a soundtrack of songs for an event, and creating a rap battle. Additional choices include rewriting song lyrics, making a quiz, writing a newspaper article, introducing Washington's "starting lineup," developing a time capsule, and many others.

* Pre-Assessment that could be used to group students

This resource includes a Word document of each item as well as links to Google Docs that can be shared with students directly or put onto Classroom. You will get links to each document and will be asked to make a copy of each to open them. You will then be able to edit the documents if desired. You can share the documents with students or post it as an assignment on Google Classroom. If you assign it through Classroom, be sure to click the "copy for each student" option.