President Hoover and The Great Depression 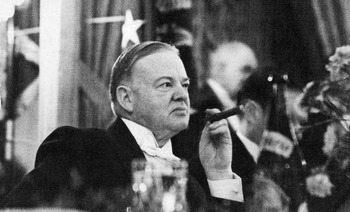 467 Followers
Follow
More products from USHistoryTeachers
$7.99
Digital Download
Report this resource to TpT
Product Description
Herbert Hoover, a Republican, was President when the Great Depression began. Hoover did not want the government to intervene. He believed the government could step in to help negotiate labor issues, but not to use tax payer money to give direct relief to those in need. He felt government assistance would discourage people from pursuing individual responsibility. One program did gain his approval, the creation of the Hoover Dam (originally called Boulder Dam) at the Colorado River near Los Angeles and Los Vegas. It helped spur on agriculture and bring water to western cities.

Hoover pursued volunteerism. He asked businesses to not cut jobs for the good of the country. Yet, this was not mandatory and many businesses did not cooperate. The President asserted that the USA was simply in a down business cycle and that the government should get out of the way and let the private market work out the problems. He eventually gave in a little and supported some government programs, like the Federal Home Loan Bank Act that reduced mortgage rate payments for home owners.

To attempt to ensure that American businesses were protected from foreign competition, the USA passed the Hawley-Smoot Tariff in 1930. When the USA did this, many European nations responded with their own tariffs. This led to a reduction of trade that negatively impacted the USA and countries in Europe. This tariff did not help the economy; it actually made it worse. America had too much surplus of many items and these actions reduced the opportunity to sell them.

The Dustbowl of the 1930s was a massive drought mixed with high winds that destroyed crops. A massive storm of dust spread across the nation. It was partially caused by farmers who exhausted the land by over farming. Dust was gathered in the air due to the loose soil the farmers created. During the Great Depression, there were virtually no government programs to help the poor and Shantytowns formed, entire villages of homeless people in shacks. Many called these villages of shacks “Hoovervilles.”

Thousands of veterans protested in Washington D.C. in 1932. They were veterans of World War I. The Wright Patman Bill was created to pay a bonus to WW I veterans immediately. These veterans wanted bills like this to become law. The group called themselves the Bonus Army and they protested in Washington D.C. in the 1930s. Though initially friendly to the protesters, Hoover eventually resorted to calling the soldiers Communists and became oppositional to them. Hoover eventually sent in the army to stop the protests and force the veterans to disperse. Over 1,000 people were gassed and two were shot. The nation, already frustrated with the Great Depression, became angry that veterans were treated this way. Douglas MacArthur and Dwight Eisenhower marched the veterans away. Hoover’s reputation was damaged due to the Great Depression and this incident with the Bonus Army.