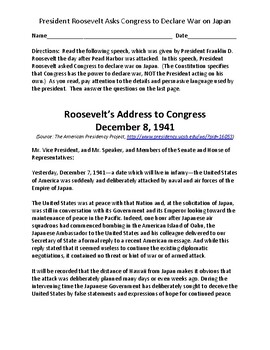 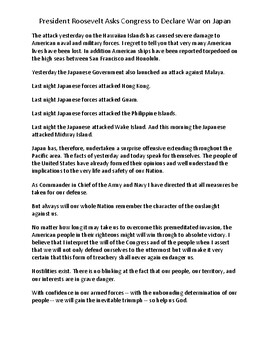 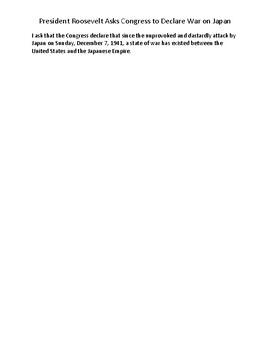 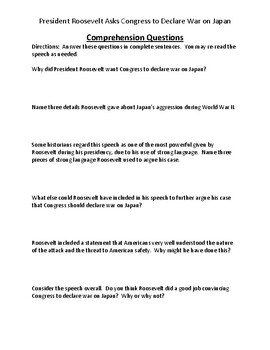 This is an activity I did with my fourth graders. I primarily wanted them to do this as a reading exercise, but it also correlated with our lessons about World War II. Since World War II was typically covered near the end of the year, this activity was great practice for state testing!

-The text of Roosevelt's speech

-Six questions based on the speech

I would usually print this out as a packet to give to the students. (Excluding the answer key, of course!) We would review Pearl Harbor, read the speech together, and discuss the speech before students answered the questions. I liked having the speech stapled to the questions so students could refer back to the speech. Also, if the students had to finish this at home, they could have the speech to read at home.

Thanks for looking! I hope you find this useful.

Log in to see state-specific standards (only available in the US).
CCSSRH.6-8.5
Describe how a text presents information (e.g., sequentially, comparatively, causally).
CCSSRH.6-8.1
Cite specific textual evidence to support analysis of primary and secondary sources.
CCSSRI.7.8
Trace and evaluate the argument and specific claims in a text, assessing whether the reasoning is sound and the evidence is relevant and sufficient to support the claims.
CCSSRI.7.6
Determine an author’s point of view or purpose in a text and analyze how the author distinguishes his or her position from that of others.
CCSSRI.7.3
Analyze the interactions between individuals, events, and ideas in a text (e.g., how ideas influence individuals or events, or how individuals influence ideas or events).
Total Pages
5 pages
Answer Key
Included
Teaching Duration
1 hour
Report this Resource to TpT
Reported resources will be reviewed by our team. Report this resource to let us know if this resource violates TpT’s content guidelines.