Presidential Elections, the Media, & Memorabilia: How Does Media Win Votes? 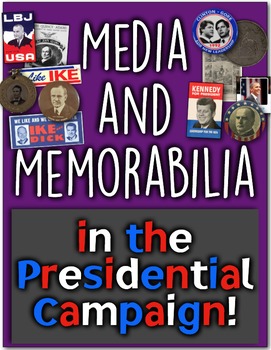 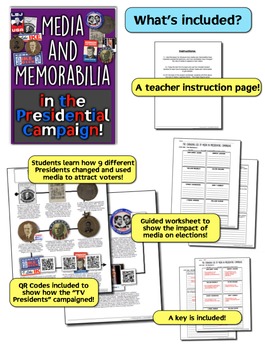 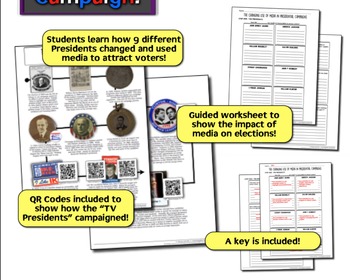 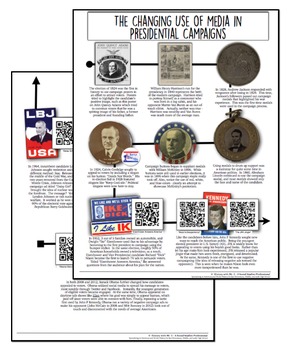 Presidential Elections, the Media, & Memorabilia: How Does Media Win Votes?

This election resource is included in the engaging and hands-on 7-lesson Election Bundle, located here:

In this highly-engaging and election-focused resource, students learn the role of media in a campaign, election, and ultimate bid for the White House. Students learn how NINE different United States Presidents have used (and changed) media and memorabilia to attract new voters. Dating back to John Quincy Adams and ending with Barack Obama, students learn about the use of campaign tactics, negative campaigning, the origin of the television advertisements, the introduction of social media (Twitter and Facebook), campaign buttons and medals, slogans, posters, and even bumper stickers! A variety of QR codes are included for students to understand the role of media in attracting voters and winning an election!

A student worksheet is included to guide students through the role media plays in elections!

A key is included!

Check out my other engaging products on the election system below:

Is it a Primary or a Caucus? Students learn difference between primary & caucus!

How to Win an Election: Students Understand Election Trends and Swing States!

Elections, the Media, & Memorabilia: How Does Media Win Votes in an Election?
Total Pages
7 pages
Answer Key
Included
Teaching Duration
2 days
Report this Resource to TpT
Reported resources will be reviewed by our team. Report this resource to let us know if this resource violates TpT’s content guidelines.