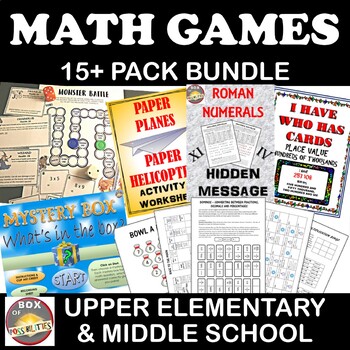 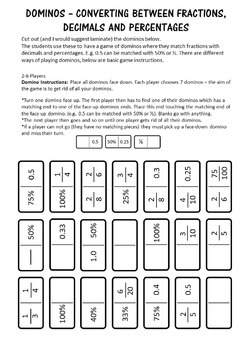 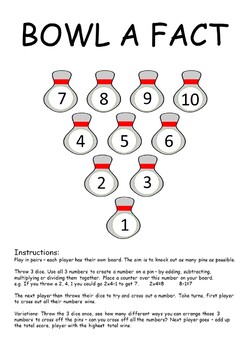 A Math Game Bundle, perfect for math centers or fun printable math games for middle school and upper elementary students, 3rd Grade to 7th Grade. It contains printables, math board games, whole class games and a mystery math message. 15+ math games and activities to enhance your students learning of math which your students will love. Most of the math activities are no prep print and go games.

Math games are a great way to engage all students and allow your students to practice their math in a fun way. Some of the games in this unit are best played in pairs while others can be played as a whole class. Dice and counters may be required for some games.

Included are the following games and activities:

Four in a Row: A popular two player game which allows students to practice their basic multiplication facts. Students have to connect 4 numbers in a row – a bit like connect four.

PowerPoint Math Warm-Up Game: Mystery Box. Fun Math Game: This PowerPoint math game is great to use as a math warm-up or just as a fun activity to review some math skills. It can be used as a whole class activity, a small group activity, or an individual activity if the students have their own devices.

Bowl a Fact: Another two player multiplication game where students have to knock down the numbers (pins) in order to win.

Paper plane and paper helicopter activities: This fun math activity combines paper planes with math (plus a bit of scientific reasoning) to create a fun practical hands on math activity your students will love. Two hands on activities with worksheets.

Dominos: Two versions of this game are provided. For this game you will have to cut out the dominos (I would suggest laminating the page first) before the students can play. In the first version students use the dominos to convert between basic percentages, fractions, and decimals. The second version is a basic facts version.

Multiplication Bingo: Always a popular warmup activity to start off your math lesson. Students choose numbers between 1-50 and mark them off as you call out basic fact questions from the four provided tables.

Time Machines: This game is a bit like snakes and ladders but instead uses time machines and black-holes to race through time. When students land on one of these squares they have to answer a basic fact question to find out how far they move.

Beat the Teacher: A whole class game exploring probability and place value up to hundreds of thousands.

Probability Game: This dice game can either be played in pairs or as a whole class. It lets the students see probability in action.

Race to the Moon: This is a printable board game which can be played with 2-5 students. Students roll a die to move around the board answering math questions as they go. A blank template is also provided if you want to create your own questions – or perhaps you could get your students to make their own game.