Produce A TV Show, A Project Based Learning Activity (PBL) 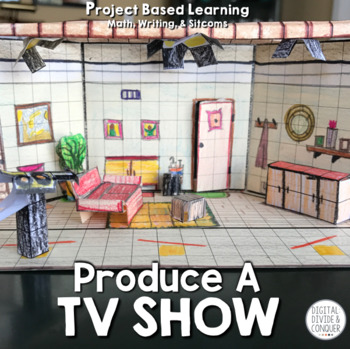 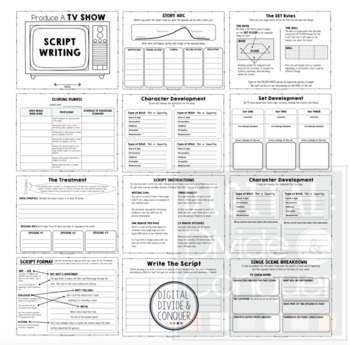 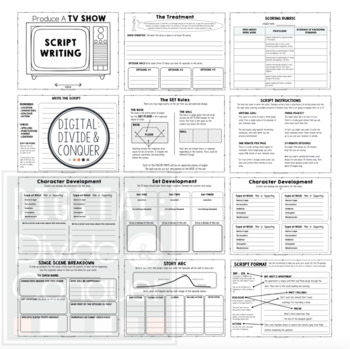 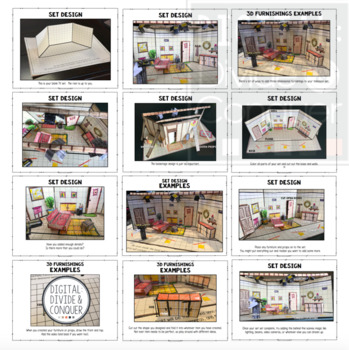 (20 MB|75 pages)
Also included in:
Product Description
Television shows don't just magically appear on screens. They might look slick and seamless, but it's because of incredible amounts of work and preparation for each episode. So why not see if our students can make their own TV show? Let them develop an idea, write the scripts, and then design the sets. Bring television production to the classroom with writing, math, (area, perimeter), imagination, and creativity.

Produce a TV Show is a project based learning activity that asks students to develop their own television show using multiple skills and move through a very-real process (that they might not be familiar with) to create something that many of us take for granted...watching TV shows.

This project based learning activity focuses on pushing students to create and design while using math, writing, and design skills while applying problem solving techniques and collaborating with others. It allows for easy differentiation, so students can work at a pace they will be successful at. There are steps and procedures to assist students through this project, but the work and results will be determined by their ideas that each students adds.

There are three sections of this PBL (and when connected) allow for students to apply multitude of skills and concepts into a project that connects with the world around them.

Teachers can mix and match all sections to fit needs of their classrooms.
This PBL does not have to use all three sections to be completed.

The project is broken into three sections:

The project begins by throwing students in to the early development stage of producing a TV show. Students will learn about sitcoms while brainstorming and pitching show ideas. They will begin to generate ideas along with developing the characters, understanding job roles, and recognizing how TV shows are produced.

Students will generate ideas using a story arc and write a script for a scene of their television show.Scripts can be hand-written or typed (teacher choice) and will focus on using a script-writing format including dialogue, settings (interiors/exteriors), and adding in action.

The script length will vary between students, but must be at least 3 pages and tells a cohesive story.Sitcoms are typically based on comedy, which means students will have to try and be funny...which shouldn’t be a problem for them.

Students will design a 3D model of their main sets for the television show.

Most TV shows have main locations where the shows are filmed (coffee house, diner, living room). The same will apply with their own TV show and they will design a three dimensional model of a set. If time permits, students may create more than one set. In fact, multiple sets can be placed together to create an entire television studio.

INCLUDED IN THIS RESOURCE:
8 About this Resource & Instructions
11 Cover Pages & Introduction
13 Section One: development
14 Brainstorming TV
15 Television Show Skills, identifying genres
16 What’s a Sitcom?
17 Sitcom Ideas: Graphic organizer to think of topics.
18 Final Choice:
Pick a final idea for your sitcom and expand them into episode ideas.
19 Character Development:
Create multiple characters for the show and flesh out their traits and who they
are.
23 Set Development: Create three set locations for the show.
24 Treatment: Write up a synopsis for the show.
25 Section Two: THE SCRIPT
26 Write the Script: Brainstorm Activity
27 Instructions and Objectives
28 Key Words:
A list of vocabulary words for students to define through writing or drawing
29 Story Arc: Mapping out the scene and/or episode of the show.
30 Single Scene Breakdown:
Breaking down the scene with characters, set needs, and more.
31 Script Format: How to format a script.
32 Write the Script: Four blank script pages to use.
Students may replace these with a computer or regular paper instead.
36 Section three: design the set
37 Introduction and Objectives
38 The Set Rules: Instructions on how to build the TV set.
40 Set Layout: Guidelines and hints for building.
41 Requirement List: Create a list of furnishings needed to complete the set.
--Use for the ROUGH DRAFT and FINAL VERSION.
42 Rough Draft Blueprints: Practice version of the set.
--Make sure everything is included and functional.
43 Final Version: Base and Set Floor pieces, which are on the same piece of paper.
44 Final Version: The Walls, this is a single page.
45 Area and Perimeter:
Find the area and perimeter of all objects/furnishings on/in the set.
47 3D Furnishing and Instructions:
Taking the set further and adding three-dimensional objects.
48 3D Pieces: 2 pages with furnishings and two blank graph papers to build with.
52 Volume: Finding the volume of all 3D objects created.
This is the same version used for area and perimeter, but includes volume which
you could use instead.
54 Adding Color: Reminders and tips for creating a vivid TV set.
55 Adding Details:
Use this as an extension for students to create the entire set on their base.
56 Build a Studio SET:
Extension idea for teachers to let student groups create larger projects.
57 Teacher Rubrics and Student Reflections
61 3D Examples:
A closer look at how to make three dimensional objects with graph paper. These
are in color and work well as projectables.
65 Visuals and Samples:
Pictures of a completed TV SET to assist students with designing their own.
These are in color and work well as projectables.

Measuring Units (SET):
The measurement used for this project will be a single unit per cube. You may choose to increase complexity by making each cube worth more. Use this with students to easily differentiate.
Example: 1 square = 3 units or 1 square = 5 units
There are no feet, yard, or meters.

Optional Materials:
-books or magazines on TV shows
-videos on TV shows
-”Making Of” videos for TV and movies
-scriptwriting articles/videos
-multimedia that connects to students at their level.

Time Frame:
The time frame for completing this project will vary. If you are planning on completing it in a week, give 45-60 minutes per day--but it still could take longer.


See More Projects in my custom category:
PROJECT BASED LEARNING