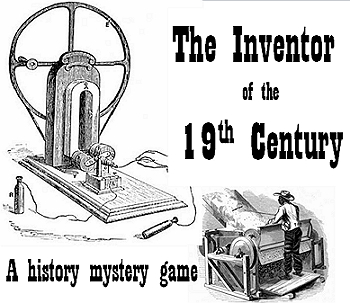 This interdisciplinary activity unit is one your students will remember long after the test! Which inventor of the 19th century deserves the title of best? Students investigate an inventor with multiple sources, compare multiple points of view and be better prepared to understand the course of human events.

Studying history must encompass more than passive absorption of facts, names, dates, and places and regurgitating them on a test. Real historical understanding also requires that students have authentic opportunities to create historical narratives of their own.

Your 38 page packet contains everything you need to get students researching an inventor so deeply they can become that character at the awards ceremony.

Rationale for using as a teaching tool and national standards of learning addressed with this activity and additional activities, internet and print resource lists are included

The 1800's were very exciting! Inventors like Thomas Edison and Alexander Graham Bell were busy making the world an "easier" place to live; while millionaires like Carnegie and Rockefeller were raking in the bucks! Cities were bustling with immigrants and people who had moved to find factory work.

Everyone is talking about which inventor will be named THE Inventor of the 19th Century. Not only will the title bring great honor and prestige, a sizable monetary award from an anonymous donor could open the door for the inventor to do even greater experimentation and create even greater inventions. .PDF and .DOC files in a zip folder.

Who Shot Prospector Pete?
Murder at the Manor (Game of Thrones can be tied in)
Who Killed Will Shakespeare? mystery activity
Chariots of Death freebie

Send in the Clones
The Toxic Ooze mystery Environmental science

The Mystery of the Underground Railroad
The Roosevelt Assassination Attempt
Who Assassinated JFK?
Explorer of the Millennium Mystery