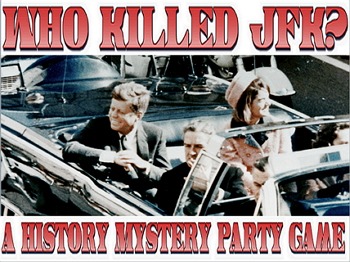 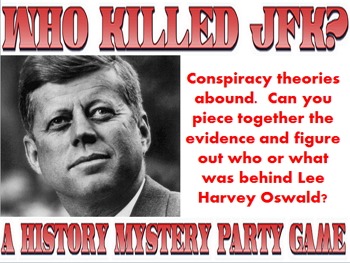 Despite the passage of half a century conspiracy theories abound. Who shot President Kennedy? Can your group finally solve the mystery?

Students become a historic person from 1963 while getting to the bottom of the assassination. No acting experience or knowledge of police procedures are necessary for the activity to be a success. Students examine primary documents and do research to examine this event.

Five different scenarios are included, each with a different set of clues (some are actual primary and secondary sources) and a unique ending. Three are for groups of 6 to 10 people,

Included are character dossiers, a director packet with complete instructions, lesson plans, Power Point and the clues. If this is being used as a drama club activity, suggestions for set, props and casting the roles make it easy for even a first-time director. Preview contains sample character dossiers and the general director’s packet.

The Case of the Lifeless Lifeguard
Writing Mysteries Can Be Murder free
Murder Times 13 freebie free
Persian Palace Poisonings freebie
Assassination on the Ancient Nile freebie free
Jake's Dead: Who Is in the Will? freebie